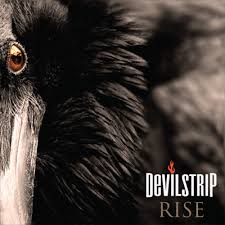 Akron trio Devilstrip have released their debut album ‘Rise’ just over a month ago and it is pretty much everything you want from a debut rock album. Formed in 2013 Marc Wasmund (Vocals, guitar) Graig Lindgren (Bass) Jimmy Gray (Drums) this band certainly have a lot going for them with their melodic sound that is sometimes heavy with edgy riffs, a powerful rhythm backing with vocals that combine to make ‘Rise’ one of the debut albums of this year.

‘Not What You Need’ starts the album off with grungy guitars before exploding into a powerhouse of rock, the vocals of Marc Wasmund grabs your attention from the outset with anthemic backing vocals adding more depth to the first song, showing that this band means business when it comes to rock. ‘Go’ the next track is instantly catchy with an addictive bass and you can see why this song has been released as a single, with a slightly southern groove it is instantly likeable.

‘Including Me’ grooves it way through the track, this is probably one of the most hypnotic tracks I have heard in a long time, slightly reminiscent of earlier rock in the early part of the new millennium but sounding completely up to date with their sounds, the riffs on this track are what really stand out for me. ‘Are You Ready’ again has the bass line and dirty guitar riffs that are a signature sound of Devilstrip, add in the epic rock vocals and this is a song that you just have to listen to as loud as you can. ‘Kill the Headlights (Roll)’ ups the pace into an intense sound that is heavier than other songs on the album but this just makes listening to the album more interesting than a lot of other albums where some of the songs can sound a bit the same, certainly nothing you can accuse Devilstrip of, this album is certainly not complacent with the every track they produce.

‘To The Enemy’ is full of riffs in the introduction before a slightly softer lyrical sound is heard but this is not at all a soft rock sound from the band, it has a crescendo of rock throughout. ‘Ugly’ may be the title of the song but it is anything but that musically, a melodic chorus which changes slightly on the verse keeps the listener more than thinking this song is beautiful rock. ‘Light Up The Room’ again has that edgy riff of guitars that is powerful in what is probably one the slower tracks of the album, and even though the tempo is slightly less than some of the heavier tracks, we are still talking full on rock with this track. ‘Love Hate Die’ starts with pounding drums before the guitars and bass crash in a wall of sound that is the most melodic track on the whole album in my opinion, everything comes together on this track, bringing the talents of the whole band all together on one epic track.

The final song ‘She Said’ is a great end to album as it has all the elements of what make Devilstrip sound a great rock band to listen to, those delicious guitars riffs, grooving bass and drums with the vocals being sung with such power and emotion that this could easily be the whole killer song of the album.

If you like rock, if you like your rock to be heavy yet melodic, then Devilstrip are certainly the band for you and ‘Rise’ is certainly the album to get. It is a great debut album and you cannot be anything but impressed with just how brilliant it sounds. It can certainly be compared to more established bands who sometimes take a good few albums to create such an epic rock sound as this and Devilstrip have achieved all this in just their first album, so this is one band certainly to watch as this band is going to be heard a lot more of in future. I certainly hope so after buying the album.

Details about the band can be found on their website http://devilstriprocks.com/band, they are also on Facebook and Twitter @devilstriprocks, at ReverbNation http://www.reverbnation.com/devilstriprocks and snippets of their debut album Rise can be found on CD Baby www.cdbaby.com/cd/devilstrip which can also be purchased from there. The album is also available on iTunes. You can also hear the album on Spotify.

Learn how to put a song on itunes at ReverbNation.com