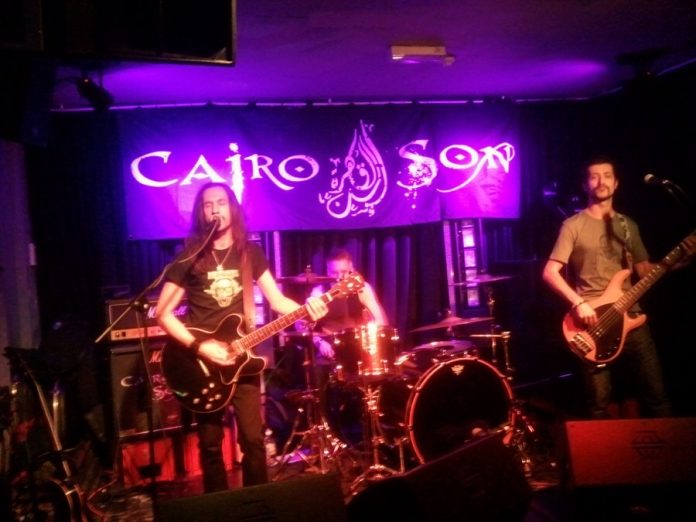 Cairo Son were special guests for Rival State on the first night of their UK tour and as the opening band, it couldn’t have been a better start. This is a band with huge heavy riffs and with a slight blues sound to their songs with melodic vocals, Cairo Son were always going to be one of those bands to see live.

As the first gritty guitar riff of the song ‘Heart Against The Feather’ played out across the venue it immediately grabbed the attention of all those in the room. With the guitars of Madgy, the bass of Rico and the drums of Kris all combining in a crescendo of massive sounding rock, as soon as the melodic vocals from Magdy broke into the first verse, you knew you were seeing a band that had everything going for them in terms of some of the best rock music ever heard. A hugely melodic chorus with delicate harmonies throughout and crashing guitars, opening songs don’t get any better than this. ‘Now That You’re Here’, the second song of the set, has a monster of a blues sounding riff with a thunderous bass line. Add in the powerful drumming keeping the beat, and the start of the song is a delicious blend of blues, rock and even a little bit of grunge. Raw yet powerful vocals add something a little bit extra to the song and you are left hearing a track that just sounds epic when played live.

‘Burnt With Spite’ was next with a gentle deep sounding guitar riff before the track explodes into heavy guitars and rhythms, it is a monster of a track and something Cairo Son are extremely good at. The vocals rising to a wall of sound that engulfed the senses, the song ended with a massive riff, the bass thumping through the speakers until the very last note.

Cairo Son then introduced two new songs into the set. ‘Storm Clouds’ had that blues sound that was a little bit gritty sounding. A slightly slowed paced song that the previous one, it had a chorus that was almost a chant after a very melodic vocal throughout and gave a glimpse that there is a lot more epic rock tracks to come from the band. A final new song ‘Give Me Strength’ was again full of those addictive sounding guitars riffs that Cairo Son do better than any other band. When a band are sounding this good you never want the set to finish and so as the final notes drifted out across the room to a delighted crowd, the band ended what was an all too brief set.

It is only a matter of time before Cairo Son are going to be heard by more people and play far bigger venues, as this is a band that is full of incredible sounding rock tunes and one of the best bands to be seen live.

Read more of Skylla’s musings on her Blog