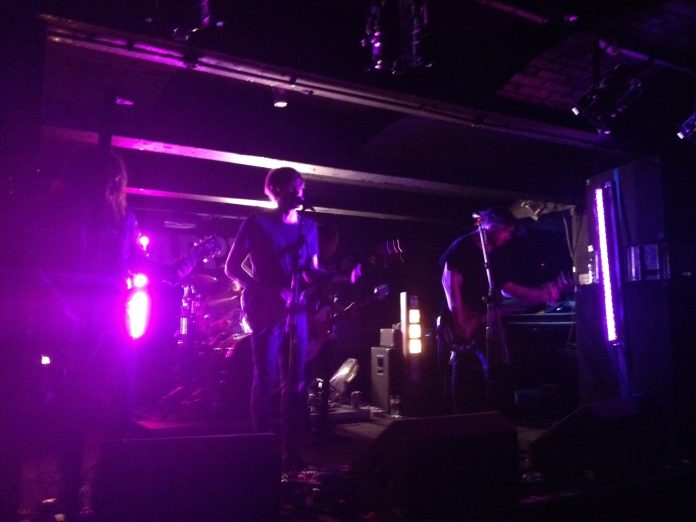 Three bands. Three radically different sounds. But only one travelled around the world to be here.

Three piece bands: how do you do it? Over the years we’ve seen enough of them to know first, that largely they are ace – Motörhead, ZZ Top and Rush, any arguments? – but also they always sound so big. Midnight Convoy are another who are somehow bigger than the sum of their parts. The trio play loud and when bass player Chris adds extra percussion, it gives things an almost tribal feel. New single “Dead Or Alive” is reminiscent of Biffy Clyro at their heaviest, as singer Dom adds slabs of angular guitar to the mix. Sounding just the right side of modern not to be achingly hip, the effect is not dissimilar at times to “Polythene” era Feeder, although a new song is played that takes things in a heavier direction. By the time they end with “Voices” and Jack beats the crap out of his drum kit one last time – with added bonus points for cowbell usage – it’s absolutely clear that Midnight Convoy are yet another group that is impressing in the burgeoning Midlands scene.

When Rival State singer Luke introduces the song “Sisters Of Fate” he says it’s about getting as much done in this world as you possibly can. For once these are not just mere words. Moving from New Zealand to London is a pretty ballsy move whichever way you look at it, but that’s what Rival State did last year and the five piece begin as though they are trying to make up for lost time. They attack from the off with new single “Sleep Talker” and don’t let up from there. the band, bathed in red and white light throughout, remain (almost literally) in the shadows, as the music does most of the talking. The tunes speak eloquently too, “Scarlet Fever” with it’s huge riff is the pick, perhaps, but “….Fate” has a big chorus and catchy solo and runs it close. “Gutter Mouth” is apparently about a “dirty girl I met once” and it has a suitably sleazy groove. This is hard rock at it’s most urgent. Rival State have already played Sonisphere this summer and are set to end the year by opening for Black Spiders. 2015 could be huge for them.

It’s left to another local band to close the show and Hidden Skies are an interesting proposition. Not least because they all look like they should be in different bands, and yet it mostly comes together in a pleasingly cohesive fashion. Hidden Skies have the most modern sound of the bill tonight, but “Sunshine Dreamer” sees the young five piece display a crunch, while the very first song they wrote, “Machines On Fire,” does the slow-building-opening-before-exploding-into-a-chorus thing pretty nicely as Al on vocals gets to display his full range. This track – and most of the others they play in fairness – is given a real shot in the arm by the superb guitar work of Rich, as the twin axe sound gives things a near metal edge. In the context of what had gone before the acoustic duet of “One” is a sharp left turn, but it is a tender moment. Elsewhere “If You Stay” has half an eye on bigger things and scuzzed up closing number “Calling It Off” is a new track the band are evidently proud off. With a touch more focus Hidden Skies can really push on.

Damp autumnal Tuesdays aren’t generally the type of thing you associate with great rock music, but the bands on this interesting and times eclectic bill do their best to change that – and for the most part did so with ease.