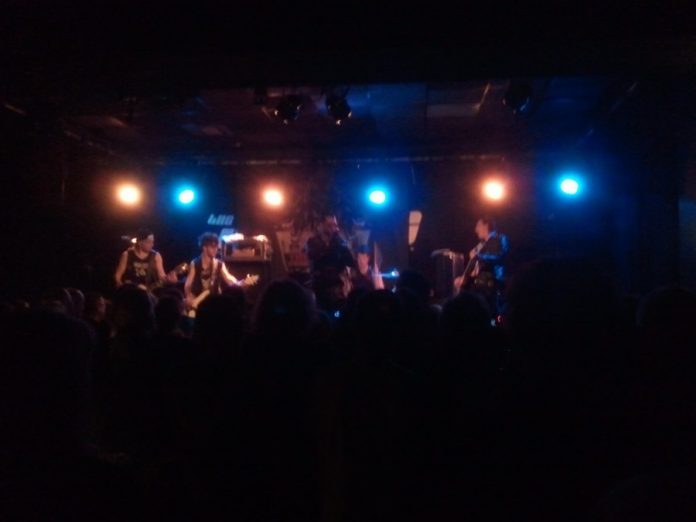 MVM’s sometime scribe Skylla went to Brighton last week for the last night of The Treatment and Massive’s, urmmm, massive jaunt with MV favourites Buffalo Summer. She got kinda excited.

The last night of any tour can feel like it is going to be one long party and tonight for the last gig of The Treatment Second Bite Tour, even though it was the 15th gig in just 18 days, all three bands were determined the last night was going to end on a high.

Massive have generated a lot of interest on this tour and with their high-octane rock sound it is easy to see why. Launching straight into ‘Burn The Sun’ with its high energy guitar riffs, Massive were here to rock Brighton. With the combination of pounding drums, enormous guitar riffs, and the powerful vocals from singer Brad Marr all in the first song, the crowd were loving Massive from the outset. With Brad making sure everyone had a beer it was then a set of ‘Hollywood’ , ‘Lacey’ with its addictively catchy chorus and a legendary guitar solo from Ben Laguda, and ‘Dancefloor’ which has become a favourite with the crowd on this tour. As the thunderous bass line of kicks in before the riff-fuelled guitars start, this song becomes epic live and everyone in the crowd was living the line in the song of ‘so turn it up because we want more’. ‘Ghost’ which starts with a slower guitar riff but the vocals rise to epic proportions in the final end of the song to cheers of the crowd. ‘One By One’ has it all and Massive gave an energetic performance throughout this song. Ending with ‘Now Or Never’ there was no let up to the deadly rock sound Massive are the masters of. A final flourish where those at the front helped Brad create the last guitar riffs by all playing his guitar, Massive ended what had been an awesome set of rock at full throttle.

Buffalo Summer have some of the best blues-infused rock songs ever heard from a band. Starting the set with ‘A Horse Called Freedom’ it was straight into a groove-led anthem of a song, with its catchy chorus it was a real crowd pleaser. ‘Ain’t No Other’ picked up the pace, huge guitar riffs and a thumping bass, Andrew Hunt with his smooth melodic vocals and the master of the tambourine made sure this track rocked. A new song ‘Money’ was next and it gave a taste of just how great the next album from them is going to sound, with its monster guitar riffs behind a thumping rhythm. ‘Rolls On Through’ with its epic guitar riffs and with the sleek bass line, it sounded brilliant live. With bassist Darren King giving his all during this song, the crowd were right with him. Another new song ‘Heartbreakin’ was next which was another song with massive riffs and another catchy vibe to it throughout. ‘Make You Mine’ once again upped the tempo before it was on to ‘Down To The River’, a huge anthem of a song and with the final chorus accompanied by hand clapping from the entire room, this was certainly a crowd pleaser. With the final track of the night ‘Into Your Head’ and more fast paced rock, Buffalo Summer ended their set and showed the crowd why they are one of the best bands live.

Coming on stage to the backing track of ‘Swords of A Thousand Men’, building the excitement of The Treatment about to play, it was straight into ‘I Bleed Rock + Roll’ opening the set with its huge riffs and the band were full of energy from the very first note. With a dangerous rhythm section and thumping drums, soaring guitar riffs and epic vocals The Treatment were sounding on top form and with songs ‘The Doctor’ ‘Don’t Look Down’ and ‘Emergency’ and ‘Let It Begin’ all with the gritty guitars and fast paced rock sound, the crowd were delighted with each song that was played. Singer Matt Jones then asked the crowd if they wanted to hear a new song and after a resounding yes it was ‘Bloodsucker’ which had more of that trademark sound from the band. Next it was a fist pumping favourite ‘Drink, Fuck, Fight” which are some of the bands favourite things (apparently….) before they played their latest single ‘The Outlaw’ which also included the intro at the start that is heard on the album version.

Eight songs in and both the band and crowd were ready to rock some more and so it was ‘Running With The Dogs’ that turned up the epic rock level even more, this was rock that was just pure brilliance. Being the last night Matt Jones asked if everyone wanted some beer and then sprayed it over the crowd before both the band and the crowd were ready to ‘Get The Party On’ which being the final night of the tour both the band and the audience were very much in the mood for this. With ‘Shake The Mountain” ending an awesome set of 11 tracks full of monster sounding guitar riffs, a pounding rhythm section and powerful vocals from the band. With an encore of ‘Departed’ and ‘Nothing To Lose But Our Minds’ The Treatment ended their hugely successful headline tour in true rock style.

One of the best tours around the UK for a long time, The Second Bite Tour will be remembered for a very long time by all those that went for being one of the most epic nights of rock ever.

Read more of Skylla’s musings on her Blog