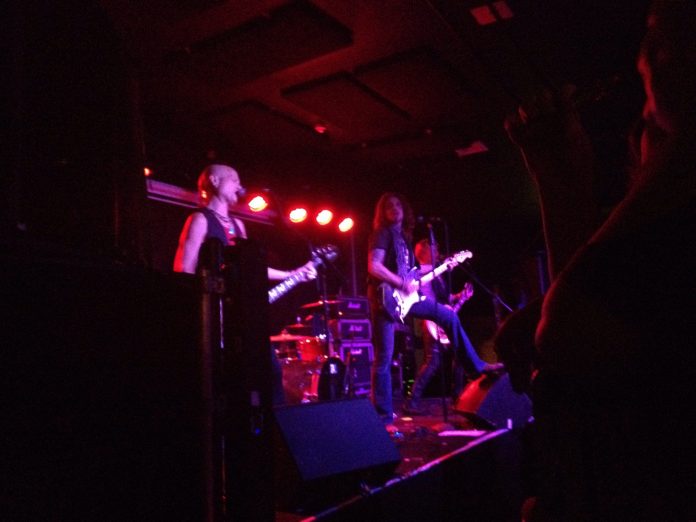 Sweden’s Kings of funky metal give a charged up performance, with a brilliant supporting cast

When singer Kyle says: “We are Theia, we play rock n roll, that’s all you need to know,” he unwittingly hits the nail bang on the head. Because the Burton boys (now with added local drummer John) are straight-ahead hard rock of the absolute best kind. “Some Days” for example, bristles with energy. The boys are playing gigs here, there and everywhere at the moment and such activity is building them a well deserved following. “Ride On” has designs on something a little loftier than support slots, but their catchiest number, “Whoop De Fucking Do” which dismisses celebrity culture, shows a band that will work as hard as they can to get there. They surely will.

Before they even play a note, Black Country (motley) crew The Remedy look like a kick ass band. They appear to have born to play heavy metal their singer, Tommy Strix even has bandana tied his mic stand a la Steven Tyler which is always kinda cool. When they do plug in they initially come over like Faster Pussycat covering early Iron Maiden. “Trouble” stomps around demanding attention, before elsewhere they ditch the NWBOHM in favour of some good ol’ Sunset Strip with “Doghouse Blues” and “Give Me A Drink.” The band have an in-built exuberance, not for nothing is one of their tunes called “Full Of It,” The Remedy are the cocksure cure.

Norfolk’s finest Bad Touch, have made real strides in the last few years, largely off the back of lots and lots of live shows. The experience they have gained as they have driven up and down the motorways of Britain is shown with another superb showing here. Singer Steve is an obvious focal point and a fine frontman , while musically there are echoes of former touring partners The Quireboys in tracks like “Waste My Time” and if Steve isn’t sure about the title of “Something Someone” (possibly!) then the huge ballad is certain to be a favourite on their forthcoming debut full length record out next year. “Preacher,” with all it’s groove, is reminiscent of The Answer at their best and good things are surely coming for Bad Touch, they even find time for a race through Led Zep’s “Rock And Roll” before they are done. Superb.

Conny Bloom doesn’t look a day older than he did when the Electric Boys debut record came out in 1989. That fact alone would be enough to make you hate him but for one simple thing: everything he has touched in the Electric Boys is so damn good.

No one has ever made this kind of music quite as well as Bloom and his mates. By turns catchy, funky and mystical, the Electric Boys have long been been untouchable at this type of thing.

Beginning with two new songs from “Starflight United” – their second record since reforming in 2011 and an album that isn’t out in the UK yet – including a fine “Spaced Out” they are soon into the old stuff and the downright dirty groove of “All Lips And Hips” and the far eastern jam of “Mary In The Mystery World” sound as good as ever.

The album they burst back with three years ago “…..And Them Boys Done Swang” is something of a mini classic and “Angel In An Armoured Suit” from it comes on like T-Rex on Speed tonight. A brilliant stomper, topped off with a sensational solo from Bloom, it is everything you could wish from the band and more.

“Electrified” soon follows in all it’s call and response “na na na” glory. It’s effortlessly cool, but gives way to “Rags To Riches” which is even better.

There’s barely a dip in the 75 minutes they are onstage. The new songs in particular are a revelation, really coming alive here and even without his guitar for a turbo-charged “Gangin’ Up” Bloom shows himself to a hip-slinking frontman of some skill.

Indeed by the time they’ve encored with “All Lips N Hips” the only conclusion to reach is that the Electric Boys are still unequivocally the kings of funky metal. Make no mistake, them boys do swang.