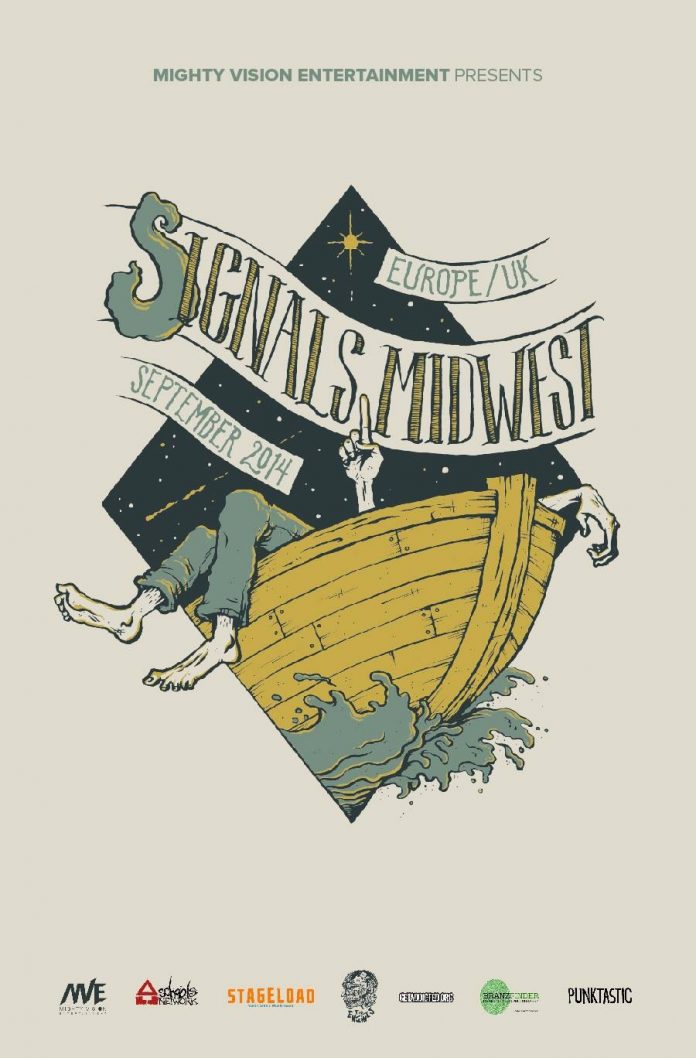 There is a decent DIY spirit of camaraderie in Scruffys venerable basement tonight. Obviously there’s been some Trans Atlantic bonding as this tour has been on the motorway’s of Britain. Nottingham punks Isaac dedicate their song “Sweetheart” to the other support tonight to thank them for lending their gear. That song, like their others, is extremely entertaining and marks the trio out as ones to keep an eye on.

“We are here now, we might as well” says Guerrilla Monsoon’s Lewis. As stage entrances go it isn’t in the same league as Kiss. The local lads don’t need gimmicks, though, by virtue of the fact they are ace. MV can say this with confidence, given that we saw them last week too.

This increased activity is probably down to the fact that new 10 inch eight track EP “Big City Plans” is due to drop next month (we’ve heard it, it’s a belter). Musically they make good on their promise to be emo tinged punk rock. To these ears there are traces of the mighty Everclear – notably on EP opener “Flock” – as well as a splash of Hot Water Music, but it’s all mixed together with some real British grit.

Lyrically they seem to be going for the approach of writing slogans. “You never changed, but you changed me,” is a key line on “Open Letter”, for example. Elsewhere there is such an ebullience on show here that there is nothing not to like. Their new single,and new record’s title track, is streaming on Kerrang right now, so all seems set fair in the world of Monsoon. “Don’t you worry about me, I will always let you down” they yell on “Believer”. They haven’t yet. Excellent.

There is a brilliant line on Signals Midwest’s Bandcamp page: “We will play in your kitchen or anywhere really,” it says. So it is that the Cleveland mob are keeping music live on a Wednesday in Birmingham – and doing it manfully.

This run of shows are the first on these shores and the band give the impression of trying to wring every last drop of enjoyment out of the experience. Even if something in the British air doesn’t agree with singer Max’s equipment. “That’s about the eighth string I’ve broken on this tour,” he opines. “That’s more than I broke in two years back home.”

Third full length album “Light On The Lake” is a cracking affair. Released last year it is rooted in punk, perhaps, but quickly having no regard for such genre trivialities and finds itself in what might be termed “blue collar” territory, SM are the sort of band that Gaslight Anthem thought they were before they turned into pop rockers.

The five piece bring their battered guitars to this particular gunfight, and there is a kind of weatherbeaten, widescreen quality to the songs, that you imagine – whether true or not – to have been written on endless bus rides to some Midwestern horizon. Ok, maybe we are getting a tad carried away here, but the point is these are not your average snotty two minute punk tunes. Hell, they even get quasi-prog on our asses. No punk band has ever said “here’s three songs that we are kinda playing altogether” before. And that trio, all from “….Lake,” shows their full range brilliantly, but none better than “An Echo, A Strain.”

“In The Pauses” is more of the same, it has scant regard for conventional structure and is all the better for it, and if older material is a little more full on punk then they do that superbly too. This is one of those rare and wonderful evenings when you discover a band that you didn’t know before but you leave as a fan of.

And that, when all is said and done, is kinda the point of DIY Punk Rock. The bands were all decamping to chez Monsoon post show. You suspect it’s gonna get messy, but these boys deserve it.