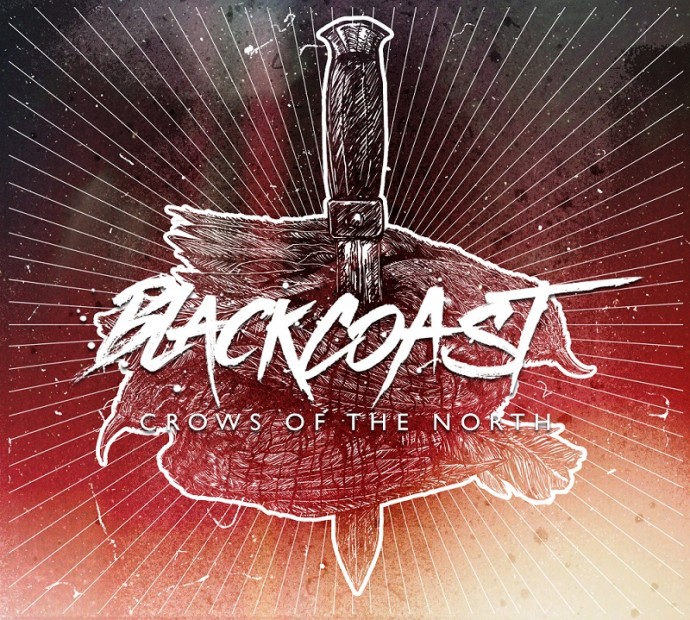 Crows of the North track listing:

Crows of the North is the creation of Staffordshire based Black Coast, described by the band as “five songs of riffs, melodies and heavy music”. This being their self-released debut EP with Charlie Hewitt: Vocals Scott Pinnington: Guitar Joe Mayer: Guitar Matt Clarke: Drums Jack Beardsall: Bass Matt Clarke.

Formed less than a year ago and hidden away in a darkened room composing refining and practicing. The wait has been well worth it and shines through with great clarity, musicianship and creativity is clearly there. All five tracks have been well put together and you can tell the effort of a band doing things the right way.

This melodic metalcore blast has got a weighty punch and kicks off with Violence Remains, a recent single of the week on BBC introducing. It’s a riff laden tune that shifts and changes mood and beat rising to an epic chorus, and is accompanied with an epically dark Video directed by Tim Palin

This is followed by Mercenary which was actually their first Video release back in January. Listening to it you understand why Black Coast have been attracting attention, and premiered on Alex Barkers Kerrang “Fresh Blood” show. A monster of a tune that will test even the strongest neck muscles.

Plagues and Habit tracks three and four continue to get heavier and dirtier with tight riffs bone crunching vocals, tracks with enough grunt to wake up the dead.

Black Coast finish with the EP title track Crows of the North an exemplary track showing the path they are taking is not often tread. With the melodic metalcore at their roots and for me the stand out track.

There will be comparisons with the likes of Bring me the Horizon Asking Alexandria and Stray from the Path and with good cause, but I think that Black Coast have much more of their own sound with strong melodies, sharp guitars that don’t sound over produced, bass lines and drums that build tracks and the vocal for me is aggressive but clear. There is a power that builds momentum and as you listen to Crows of the North.   With many gigs planned and more material in the pipeline, catch them when you can these boys are only going to be a must see. Great work I know I will watching them soon as I can.