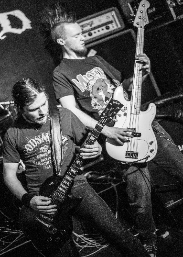 Stig is blown away by Birmingham’s finest trio

In for a treat Stoke on Trent Torous have brought their Celtic Metal train to town. I’ve witnessed Torous before and the sound they generate always amazes me, there are just three of them on stage but the sound is so full-on.

There is no way on gods earth that you can replicate what they do on stage onto a CD you have to see them perform to understand what theyare about, so I did. Marc dressed in a Godsmack t shirt and baseball cap Tom hidden behind a massive double kick drum kit and GMT with a 6 inch Mohawk and donned in a misfits t-shirt, but these are far from misfits. They are three very accomplished musicians that are so well blended together.

What a start the set Seven a monstrous instrumental blast setting the tone for the night, then straight into Tolerate X with some stunning drums from Tom. Next up was the first of two new ones. Playing Human with intense guitar drops tempo changes and drums that kept on coming. A riff started

off by GMT inspiring Marc’s lyrics and sparked the inspiration for such a great tune. Dried Bones taken from their stunning debut EP of the same name is when it got serious off came the cap and Torous took it to another level. The second track from their current EP Hide In Sides starts with a clever volume roll on the guitar which creates and eerie sound which rumbled into a doom ridden tune with awesome guitar squeals. God Game Suicide, the second of the new material, shows the growth and strength of their writing and has a most amazing ending. Feed The Fire is on the Paint the Sky which is their

acoustic 3 tracker and it transposes so well as both acoustic and electric. The final song was Roll The Tide the third track taken from the Dried Bones EP. Having a great crowd response they played Crow Road as an encore. Torous blew the Freebird away with the music and performance. An original band with an original style and sound, just like their writing. Torous are going from strength to strength and get better each time I see them perform. One for the future.