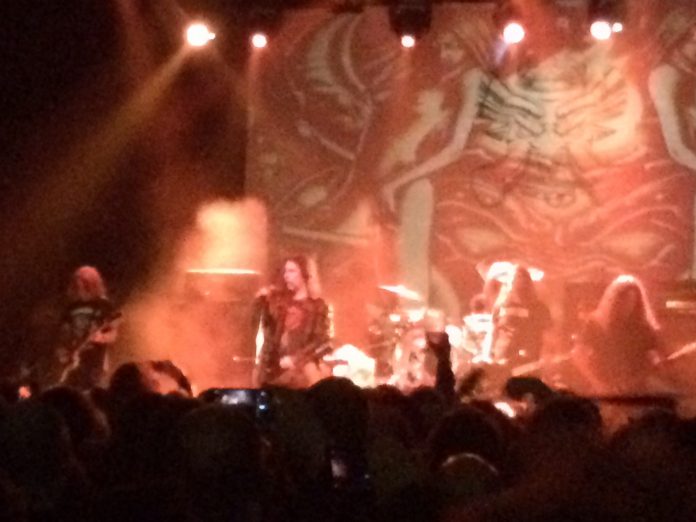 There is a real sense with Scorpion Child that this a rebirth. Not that there was anything wrong in the first place, but now with a new line up and record number two in the offing, it feels like this time is the time. If it is then they are well placed to really kick on, certainly if this set is anything to go by. Heavy on new material – and given that the aforementioned record isn’t out until June that probably explains their confidence in the new stuff – “Reapers Dance” is wonderful and there’s a mesmerising quality to title track “Acid Roulette”, not least because singer Aryn Jonathan Black stands entirely motionless throughout the solo section. They don’t forget that incredible debut record, however and “Kings Highway”, “The Secret Spot” and the monster that is “Polygon Of Eyes” is a fine closing track. Scorpion Child are growing up magnificently.

Orange Goblin singer Ben Ward is in the mood to party. And given that it would be a brave – or possibly stupid – man that ignored him, it’s slightly strange that time and time again throughout the 50 minutes that Britain’s finest purveyors of greasy, beer filled heavy metal spend on the stage he remarks on the subdued nature of things (“I know you’re stoners and shit but come on…..!” He says at one point.) The fact is, though that Goblin are a brilliant band with brilliant songs and they play some of them here, “Scorpionica” gets fists in the air to kick off and “Devils Whip” is ever more important given Lemmy’s passing. There’s a couple of rarities in the set too as “Cozmo Bozo” gets its dirty blues on and “Shine” is dusted off, and there’s absolutely no denying the barmy tour de force that is “Quincy The Pigboy”. By the time “Red Tide Rising” has ended things, Ward has given up trying to get anything from the balcony, and instead is concentrating on being the frontman one of the best bands currently on the planet. Job done, then.

There are few bands, with the possible exception of Iron Maiden, that do as skilful a job of mining their past on their terms as Monster Magnet. Tonight’s show is all about, as the poster says, “Celebrating The A and M Years”. That is to say the four albums that the band released on a major record label over a seven year period between 1993-2000, and which nearly made them very big stars indeed.

And although you sense that main man Dave Wyndorf is happier artistically these days, it’s fair to say that London goes about seven different kinds of crazy when the band march out to “Crop Circle”. The hysteria levels go up a notch or two from there when it’s followed by “Powertrip” with its stunning chorus.

There’s no let up either in a thrilling 95 minutes in this mad world. A decent smattering of songs from all those records, remind anyone what has forgotten just how good these songs were and still are, particularly the likes of “Twin Earth”, “Look To Your Orb For The Warning” and Dinosaur Vacuum” which are given prominence here. There’s the outright deftness of “Tractor” and the stonewall brilliance of “Space Lord” all before the encores.

When those do come there’s a turbocharged race through “I Want More” and a projector showing ladies in various states of undress for “Face Down” before it ends as it kind of had to with “Negasonic Teenage Warhead” which is still surely the only song to include the phrase “supersonic jerkoff” and still make perfect sense. For that alone surely you have to concede there’s a genius ar work here.

The career of Monster Magnet has been many and varied, but few can touch them when, like here, they are in full flight. As Dave Wyndorf himself exclaimed at one point: “Damn, I love playing this shit!” And that’s all the validation it needs.