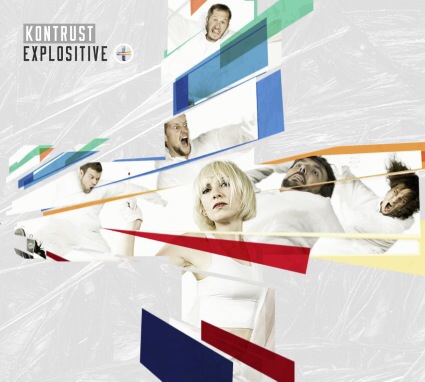 Metal meets Eurovision? The Band who’ve taken the continent by sounding a bit like Grand Theft Audio did. Only slightly less bonkers than a Ginger Wildheart solo record. We leave it to Laura to get her head around it all.

Austrian band Kontrust band have become very popular on the continent having had over 2 million YouTube views for their hit single ‘Bomba’ alone.

The current line-up of female singer Agata, along with Stefan, Mike, Gregor, Roman and Manuel bring with them an eclectic mix of styles to the album that certainly makes it hard to define it as any one genre but if any of their videos are anything to go by which can be slightly quirky and fun, this is probably how the band prefer to be.

Opening track ‘Dance’ starts off with an eastern sounding undertone in places and a mixture of guitars entwined with melodic vocals, which is heard again in ‘I Freak On’ and ‘Bad Time’ . ‘Why’ is a fast paced song that sounds almost euro-beat with strong percussion. ‘Just Propaganda’ is a heavier sounding song, with a heady mix of guitar riffs and an almost hypnotic chant forming the basis of the song whilst ‘Shut Up’ combines contrasting vocals and styles and once again the riffs bring an energy to the track. ‘Cosmic Girls’ has a pulsating beat from the outset, the drums being an integral part of the song with gravelly sounding verses before ending on a rush of riffs.
Once you get to ‘Vienna’ which again has that pounding drum sound before tight sounding guitar riffs flow through the track, you get to a more heavier sound on the album which draws more on influences within the rock genre and again is heard on ‘This Is My Show’. ‘Bulldozer’ has one of those dirty bluesy riffs that forms a groove-led rhythm section throughout the whole song and ‘Play’ starts with its distorted intro before monster riffs undulate behind a mixture of raw and melodic vocals that are present throughout the entire album.

Having listened to ‘Explostive’ you can see why Kontrust have gained a lot of interest in Europe and it won’t be long before their distinctive sound will be much talked about over here in the UK.