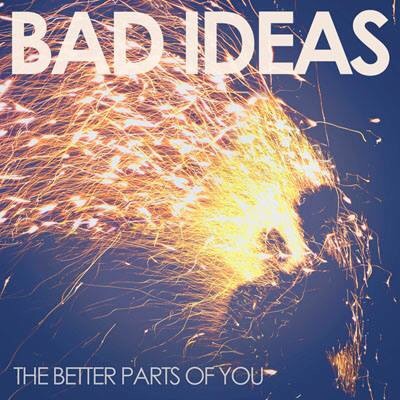 On this, Bad Ideas new EP, the Leeds based four piece come come bouncing out at you with “I Prefer You Way Beyond Inebriated.” Musically it has echoes of Biffy Clyro and there is a touch of Funeral For A Friend perhaps, but that doesn’t tell the full story. The content here is darker than it might first appear. “I prefer you way beyond inebriated,” sings singer Sam Cook, before the pay-off line “but to be honest, I’d prefer someone else.”

Bad Ideas started as a solo project for Cook, before becoming a fully-fledged group on the “Compromise” record, and there is a maturity here beyond a band who is just on its second EP. “Clumsy Hands,” the first track the band released from “….Of You” and the song rumbles along with just enough restraint to tell you that it could cut loose if it wanted to.

“Birds Head South” is a mid-paced affair that displays a tenderness that you wouldn’t have initially associated with the band, and the final track that makes up this quartet “Kathleen’s Ideas” continues that theme to great effect.

Bad Ideas are a band that very obviously has plans and ambitions, there is a real class to the four songs, and a variety of sound that elevates this above the mundane. This a band with potential and make no mistake about it.