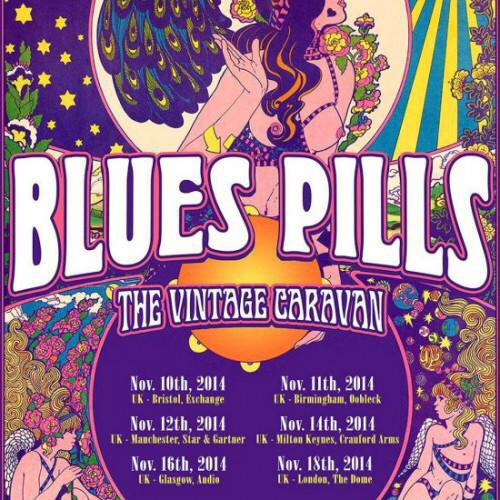 After a delay in opening the doors at Birmingham’s newest venue gives us all chance to chill (literally) by the pool (for the sake of explanation there is a massive swimming pool right outside the door). It’s left to Blackwolf to shake off any apathy that has set in.

The West Country mob are fantastic. They swagger, they have melody, they have a sack of good songs that they released on an album called “The Hunt.” Even better they haven’t let the grass grow under that collection either. They have released the brilliant one-off single “Kiss The Fire,” which they play here as well as airing a brand new track in “Steady Slow.” This is clearly a band in a good place creatively.the atmosphere is a touch muted, maybe it’s the dank Tuesday in November outside, maybe it was the delay (and actually it could just be that MVM’s view is terrible, given that we are sitting in amongst the crowd and can’t actually see the stage clearly) but it’s not as blistering an atmosphere as you might have thought. Certainly whatever it is, it’s not Blackwolf’s fault, as they are on fine form. They appear to realise it too. Singer Scott Sharp frequently mentions how early it is, and you suspect that Blackwolf’s first visit to Birmingham won’t be in their list of 2014 highs. For our money Blackwolf are – along with Broken Chords – the most promising hard rock band in Britain right now and that isn’t an opinion we’ll change, any band with a song as good as “Sea Of Mercy” which ends the set here, is surely destined for the top.

“We’d like to say thank you for Black Sabbath” says Vintage Caravan singer Oskar, who is clearly relishing the chance to play the second city. A few months ago MVM saw the band open for Grand Magus, so we already know the Icelandic youngsters (words carefully chosen) debt to the great ones from just up the road is obvious. They are deliciously retro, classic rock with touches of prog. “Craving” is enormous, “Cocaine Sally” rivals it and elsewhere they appear ready to break info “Paranoid” at a moments notice. Perhaps their peak is a groove laden “The Kings Highway” which lives up to it’s weighty title by being royally entertaining, although the slower “Winterland” shows their blusey, more sensitive side. How a trio of such tender years has created songs like “Expand Your Mind” Lord knows, just be grateful they did.

When Blues Pills were announced as the support to the phenomenal Scorpion Child last year, the multi national band were at once an interesting – and in places stunning – affair.

Singer Elin Larsson is a woman with a voice like Janis Joplin and the band behind her were a joy to watch. Since then, the release of their self titled debut record has done nothing to dampen anyone’s enthusiasm for the quartet.

They start tonight with that record’s opening track “High Class Woman.” A supreme slice of bluesy rock, it has a real late 1960’s feel, up to and including the Grateful Dead style jam it becomes.

“Bliss” is another to be aptly named. It’s funky overtones give a contented vibe, with “Devil Man” darker in feel. And where the rest has been loud rock n roll, set closer “Little Sun” is more fragile.

Damp November or not The Oobleck is packed tonight, a fact that the singer notes before tearing into encore “Black Smoke.” Proving that right now, the appetite for new bands with a classic sound cannot be satisfied quickly enough. First it was Rival Sons, then it was Temperance Movement. Following that well-worn path, you can be absolutely sure you won’t see Blues Pills in a venue this size again.