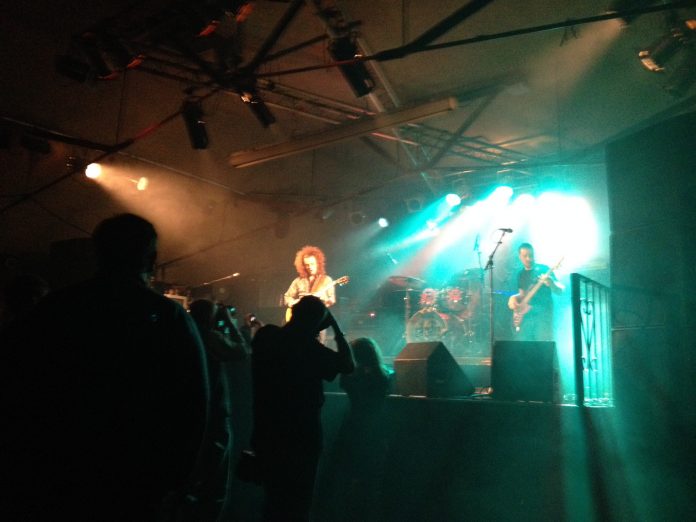 Of all the brilliant young blues bands in the UK right now, is this Army Of Three the best?

It has to be said, if you want to get in MVM’s good books quickly, then adding a horn section to your mix is a sure-fire way to do it. North Staffs Blues collective Chris Bevington And Friends do exactly that and very, very welcome it is too. Adrian Gibson adds a stone cold magnificent trumpet solo in the middle of the set, while “Dark Side Of Love” is given a real New Orleans feel with the liberal use of his instrument. Bevington himself is the bass player, content to stand in the shadows behind Scott Ralph an extremely talented guitarist – you have to be to pull off Hendrix’s “Bold As Love” as well as he does – with a gritty vocal style, and the set has a rare authenticity. Their cover of Clapton’s “Crossroads,” dedicated to Jack Bruce is faithful and joyful, while Buddy Guy’s “She’s Out There Somewhere,” has almost jazz overtones. At it’s best when treading a real funky blues line, the band are evidently enjoying what they do and there is a real warmth on show here, often featuring up to ten people on stage, they are shorn down tonight to the essential. There is absolutely nothing about Chris Bevington and his mates not to like. Exactly what blues music should be about.

Virgil And The Accelerators have long been ones to watch. Scorching live shows have long been almost a byword when dealing with the band. Now, though, they have delivered on that promise with a quite brilliant new record, the Chris Tsangarides produced “Army Of Three.” VATA play a couple of the new songs by way of a welcome tonight. It’s lead track “Take Me Higher” is followed by their us-against-the-world tale “Blow To The Head” and it’s immediately clear for all to see that Virgil And The Accelerators in 2014 are a leaner, meaner, more rock n roll beast than ever before.

Supremely talented musicians, the trio, Virgil on guitar, his brother Gabriel on drums and Jack on bass, now have a maturity about their sound that is far beyond their years. All those years spent on the road, all those countless gigs has made what was a promising band into a bonafide great one, even early work like “Backstabber” crackles with road tested groove now.

VATA’s most obvious star turn is the frontman himself, bedecked in sparkly shirt and black scarf, with his prodigious locks under his Alice band, Virgil looks every inch a rock star, that he can play guitar quite as well as he does to go with it is sickening. He plays three main solos tonight and they are ridiculous in terms of their dexterity and versatility. It’s to his credit that he doesn’t overplay his six string hand, always remembering that the song is the important thing, even when taking segues into Rolling Stones’ “Miss You” as he does tonight, seemingly for fun.

A set that’s split roughly half and half between new and old songs has a soaring “Low Down And Dirty” an absolutely enormous, epic slow burner at it’s heart, with Virgil lost in a world of his own, as if transfixed by his instrument.

“….Three” closing track – and one of it’s standout moments, the countryfied “Free,” performs those duties here too, seeming to call out to some far distant horizon, this is the Blues in widescreen. Following encore is an excuse for a huge freak out, after having started with Keith Richards’ “Thru And Thru.”

Very soon resistance will be futile. This army of three is going to conquer all before it. Best just wave the white flag and surrender to Virgil And The Accelerators now. It’ll save time.