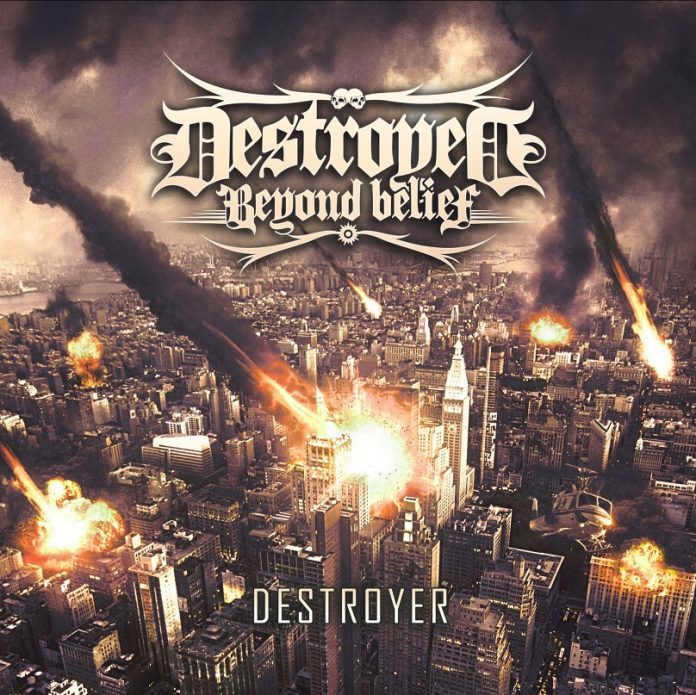 Brand new extreme metal from a band who’s live show blew us away the other week. Do they match that on record?

There is a DVD which accompanies this CD, the debut full length album from Destroyed Beyond Belief, on the film (directed by singer Sean Westwood) you get a glimpse of the band as they set about making the record.

It shows a band that is dedicated to their music, obviously likes each other, but also doesn’t take things, shall we say, too seriously. There is much drunkeness, and even more larking about, but all this is juxtaposed by some of the heaviest metal you will hear this year.

The band describe it thus: pure, no fucks given, heavy metal.

Sorted. There maybe nothing else to say, but that’s never stopped us before…..

A lot of those close to the Midlands’ burgeoning and flourishing metal scene have been very, very excited by Destroyed Beyond Belief for a very long while, MVM saw them live the other week for the first time and it wasn’t hard to see why. Their performance on that bill was astonishing – and even when your humble scribe got their names wrong on the review, the rather-more-affable-than-their-sound-would-suggest band just laughed it off with a shrug.

That may be because all their anger is channelled into every last note of “Destroyer.” Because this is a record that absolutely crushes from the get go. “Death Before Dishonour” begins with these lines: “I will not become obsolete/I am fearless, resentful/Demanding all my needs/I bow to no man, no man,” and gets heavier from there.

There have been thousands of bands over the years that can do aggression. Only the select few really good ones can come up with something that adds a different take on anger. DBB are one. “Broken Pride” sees Westwood extend his vocal range to genuine melody, while the incredibly dexterous guitar playing from Steve Tonks and Edd Bailey is thrash one minute, as tight as Sikth the next and full on Iron Maiden in the blink of an eye.

Where this album – and this band – really scores is they don’t tread the well-worn extreme path. Their clever, and yet sparing, use of Marie Servern’s sampling skills is a real surprise. “Kingdom” is perhaps the best example of this. Her work on this track adds a power that wouldn’t be there without it. Similarly on “Embrace The Flames” it’s just there in the background, doing something that few other bands would even think of.

A record with scarcely a weak point, let alone a weak song, “Destroyer” gets genuinely menacing on “Revelation.” A monstrously heavy, short song, it is the aural equivalent of being glassed, “get on your knees and worship me” is its last line, and it doesn’t seem to accept no for an answer.

There are couple of further interesting turns before the finish. “Sorrow” begins in understated fashion before becoming absolutely huge. This is not a track that is designed to be played in small venues for too much longer. Closing track “Days Of Surrender” is the closest thing here to a lighters in the air moment, and bookends the album superbly.

On that DVD guitarist Edd Bailey says that “there are seven billion people in this world, one of em has to like this record. As long as I find that person I’ll go to bed happy.’

That may be the type of self-deprecating thing that some people say. But then DBB don’t strike you as the sort who lack honesty, so on that basis you assume he means it. He should soon be able to sleep like a baby, then because “Destroyer” is absolutely brilliant.