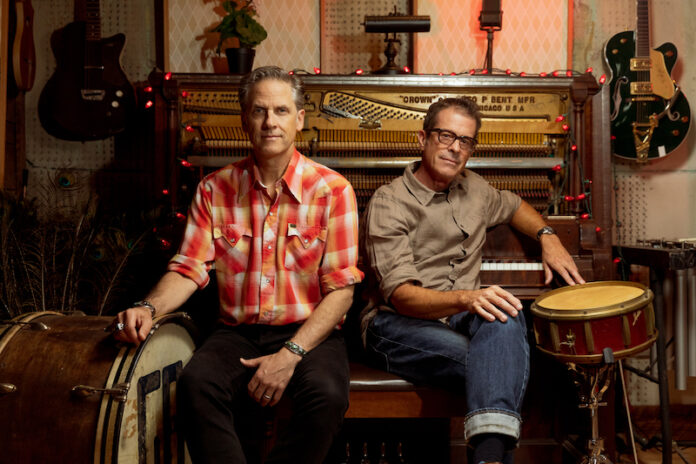 Oscillating between haunting desert noirs and buoyant jolts of cumbia, Calexico recently announced their 10th studio album ‘El Mirador’, which is out April 8th via City Slang. Today they are sharing their new single “Harness The Wind”, which features backing vocals from Iron & Wine’s Sam Beam. Calexico will tour across Europe in April and May with a headline London show at O2 Kentish Town Forum on May 14th.

“When we recorded “Harness the Wind” it felt like we tapped into a spark of bright light and positivity,” said singer and Calexico co-founder Joey Burns. “Everything fell together quickly and naturally. With the shiny electric guitar weaving in and out of John and Sergio’s propelling drums and bass, the song always had a vibe that stood out from the other songs. We sent the tracks to Sam Beam to add his vocals on the chorus which made the tune float even more. It’s a song about hope and sharing compassion to fellow travelers and dreamers who are trying to find their way.”

Burns and drummer John Convertino have been performing together for over 30 years, sharing a deep love of jazz and usually building songs on a foundation of bass and drums. But all these years later, Calexico is still breaking new ground. ‘El Mirador’ showcases a sunnier side of the band, cutting through two years of pandemic fog with a blast of danceable optimism. Writing and recording alongside Sergio Mendoza (keys, accordion, percussion), the album expands on long running influences of cumbia, mariachi and the plethora of diaspora sounds flourishing throughout the Southwest.

“I’ve been playing with Calexico for about 15 years, and I admire Joey and John’s constant search for new sounds,” reflects Mendoza, who’s newly built home studio became a refuge for the band and reduced pandemic risks while fostering a more organic creative process. “After so many albums,” he adds, “I’m really proud we were able to achieve something so fresh together.”

El Mirador stands both as a lookout point and beacon in the dark; an opportunity to search inwards, ponder our connections to the Earth and its people, and hopefully illuminate a path forward. After decades on the road Calexico’s music remains boundless and romantic, still gazing upon the horizon in search of their next adventure. Pre-order album here.