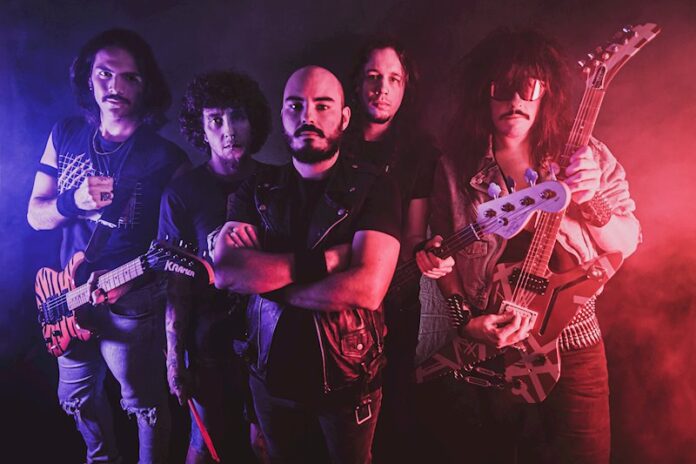 “Mars Recall” is the second single of Digital Race, the first full-length of Spanish Heavy/Speed Metal band Redshark. The lyrics and music was inspired by some sci-fi movies and books and spoke about someone remembering a space mission, in a big galactic war, after his return from Mars to the Earth. The open end of this story is inspired by Roy Batty’s final speech in Blade Runner: “I’ve seen things you people wouldn’t believe…”.  Watch  Redshark ‘Mars Recall ‘ brand new lyric video on Youtube HERE

PREORDERS AVAILABLE HERE
REDSHARK was founded in 2012 in Barcelona – Spain,  by Philip Graves (guitar) with the aim of delivering Classic Pounding Heavy Speed Metal. Their traditional 80s metal influences may plunder the nostalgia circuit but REDSHARK are ruthlessly carrying the torch with great attitude, and powerful melodic songwriting.

Their new album entitled ‘Digital Race’ was recorded in 2021 and will see a release in March ‘s end , 2022.   It was produced by Jaume Perna (Jack Dark) and mixed & mastered by Gonzalo Vivero in In The Red Audio.   Cover art was made by Jose Antonio Vives.