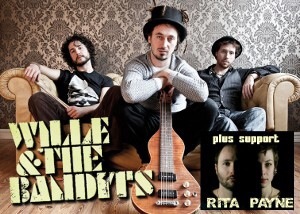 I arrived for the last three numbers from Rita Payne. You’d expect it to be a solo singer, but in fact it’s , a Doncaster duo comprising of Rhiannon Scutt and Pete Sowerby so I can`t really say too much about them apart from the fact that they seem to have warmed the audience up nicely.

On to the main event and on come Willie and the Bandits. What
follows is a masterclass in music. A mixture of folk, world, rap, metal, blues and psychedelia, not a band that can be easily pigeon holed.

“Butterfly For A Day” and “Why Do You Do it” are played before the
leader of these bandits, acoustic guitarist and slide player Willie Roberts introduces a song which he wrote for his baby daughter Neave called “ Watching you grow”

He tells us the band left Cornwall at 6.00am this morning to get here. “Galloping Horses” follows before they perform a cover of Robert Johnson`s “Crossroad” and a selection of their own stuff.

The band have many good songs: “Still Go Marching In” and “Trouble Down The Line, ” are certainly amongst them, but it’s the insanely catchy “Gypsy Woman” that I can`t get out of my head since hearing it. And as if to prove the diversity here “Jack the lad” a track that’s best described as a sort of slide guitar metal rap leaps into view. There really are time when music defies description…..!

To finish the set we have a fifteen minute, mostly auditory song “Angel” which leaves the small but boisterous audience reeling. The punters aren`t satisfied and the boys encore with a really interesting version of the Dire Straits number “Money for Nothing”

What a show. Looking at the guys you`d expect something like the
Levellers but no, these fellas play an eclectic set of music which really gets you going. I`m sure Wille and his bandits will be playing some festivals this year and they would be storming in that setting.

Get to see these guys if you get chance, they will blow you away.