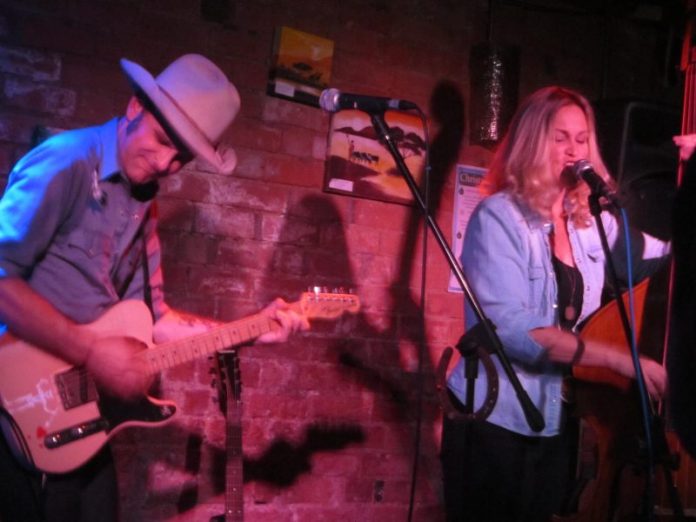 It is wonderfully fitting that the first half of the Wild Ponies set tonight is made up of songs from their gorgeous “Galax” album. Released just last week it is named after the town in Virginia’s Blue Ridge Mountains where Doug Williams’ grandfather had his farm. The album was recorded live there. In one of the outbuildings, by Doug, his wife Telisha (the duo who make up the band, now based in Nashville) and assorted members of their friends and some old-time players that had worked with Williams Snr.

The result is these songs belong in this setting, they have a life of their own, and they sound perfect. “The Tower And The Wheel” builds slowly, “Sally Ann” (“Grandad said it should be the goddamn national anthem” says Doug) is a stomping barn raiser and fitting homage, but it is with “Pretty Bird” that the band come into their own. So fragile it almost seems like Telisha’s voice is ready to crack, while “Mama Bird”, the very next song, is about a feathered friend that nests in their porch at home.

It is this gift for finding joy in the everyday that shines through in this section. “Here With Me” adapted from a poem written by Doug’s grandad is clearly delivered with emotion, and “Jackknife” possesses a fine chorus.

The acoustic portion, if you will, concludes with one that isn’t acoustic at all. “Will They Still Know Me?” sees Katie-Marie (who completes the trio when they play live) play drums with Williams accompanying his wife’s Double Bass with some lead guitar.

It very much acts as a prelude for what follows.

“Things are gonna get loud and weird,” smiles Telisha – a woman who seems to smile a lot. She’s half right. There is nothing weird though, about full on rock n roll and for half an hour that’s what they provide.

“Born With A Broken Heart” and “Love Is Not A Sin” showcase last year’s “Radiant” album superbly, while “Things That Used To Shine” sees them drop a little further into the back catalogue. It also gives them a chance to – unwittingly – show why they are quite so beguiling.

Recently they have been played on Bob Harris’ radio show. This has clearly meant the world to them, as has the fact they’ve been at chez Bob today to record a session. The fact is, though that when a band has Americana as good as “Trigger” and “The Truth Is”, which sees Doug play a brilliant solo, then it would be an awful oversight if they weren’t played on radio.

“Broken” – with more of a nose for trouble than on record – and “Unplug The Machine”, which stamps its feet in a similar kind of way to Billy Joel’s “We Didn’t Start The Fire” all those years ago, namechecking Pussy Riot, Islamic State and 50 Shades Of Grey as it does, sees hair truly let down, but oddly it is what happens after that convinces that Wild Ponies are a thing of rare skill.

For their encore they play “Radiant” entirely acoustically. Amps off, it is just beautiful and a rare moment of togetherness in a fragmented world.

Before they play it, Doug Williams says something that is very obviously genuine: “it means a lot to us to come this far from home and have people come watch us play,” he explains with an air of incredulity.

Yet, the reason people do is simple. Music is a universal language anyway. When it is this good and played with this much enjoyment and fun, it doesn’t matter where you are from, it truly speaks to the heart.