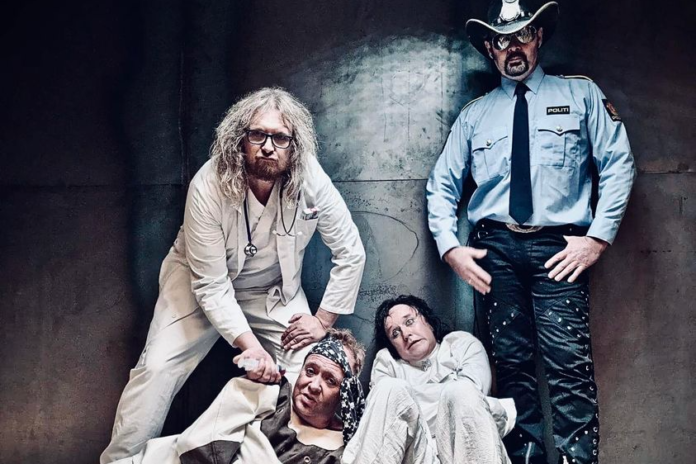 Norwegian rock n’ roll warriors Wig Wam have announced the release of a new studio album entitled ‘Out Of The Dark’ on 10th February 2023. Following fresh interest in the band thanks to their classic song ‘Do Ya Wanna Taste It’ being used as the theme song for HBO’s popular Peacemaker superhero TV series, ‘Out Of The Dark’ sees the band feeling truly reinvigorated and inspired. A first single and video for the album title track is available from today.

“We came out of the pandemic and had a pretty rough ‘rebirth’ doing a comeback in the midst of this dark period of live music,” explains vocalist Åge Sten Nilsen. “The new album is, of course, also a ‘happier’ record, even though some of the song lyrics reflect on darker themes in our society. However, they all have one thing in common: a positive outcome and never giving up.”

Wig Wam will tour the USA, mainland Europe and Australia in early 2023, with more dates to be added that can be checked HERE.

Wig Wam are vocalist Glam (Åge Sten Nilsen), guitarist Teeny (Trond Holter), bassist Flash (Bernt Jansen) and drummer Sporty (Øystein Andersen). They formed in 2001 and have been mixing ’80s inspired glam metal with classic hard rock, entertaining lyrics and OTT imagery to create an old fashioned rock n’ roll vibe ever since. Having issued a debut album in 2004 entitled ‘667…The Neighbour of the Beast’ (later changed to ‘Hard To Be A Rock N’ Roller’), they made an international breakthrough when they represented Norway in the Eurovision Song Contest, finishing 9th with the song ‘In My Dreams’. They went on to release three more studio albums, ‘Wig Wamania’ (2006), ‘Non Stop Rock ‘N Roll’ (2010) and ‘Wall Street’ (2012) before splitting in 2014.

They reformed five years later and recorded ‘Never Say Die’ (2021), following which film/TV director James Gunn selected their 2010 song ‘Do Ya Wanna Taste It’ (from ‘Non Stop Rock ‘N Roll’) as the opening theme song for ‘Peacemaker’, which stars the famous WWE wrestler and actor John Cena and is based on a DC Comics character. This stroke of good fortune has helped to showcase Wig Wam to a brand new audience; now, with ‘Out In The Dark’ in tow, the group are ready to show off their entertaining brand of hard rock ‘n roll to a worldwide audience.

includes the single
OUT OF THE DARK
video
youtu.be/u7ZQliCl8fI