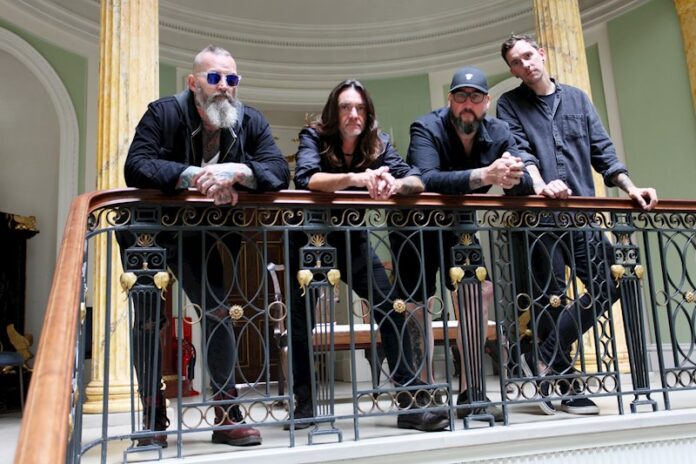 This House We Built today premiere their video for ‘Fly Me Up To The Moon’ – a moving, personal track which is taken from their recently released self-titled 10-track album, released on 15th October this year.

The band is a new rock act hailing from Scarborough, North Yorkshire and their debut album is already making big waves in the rock scene.

Shot at and around Sledmere House, in the East Riding of Yorkshire, ‘Fly Me Up To The Moon’ – the video brings to life a moving, personal song that vocalist/guitarist Scott Wardell wrote about his Nana’s fight with dementia.

This House We Built formed as an amalgam of guys who have been playing the circuit for a good few years previously in various other acts. The line-up fields:  Scott Wardell (vocals guitar), Andy Jackson (guitars vocals), Oz Ward (drums vocals) and Wayne Dowkes White (bass).

As their colourful bio notes: “The real bricks and mortar of the band are a heady mix of bands from England’s Scarborough Strip (think Sunset Strip but with less debauchery, more chips…).”

The band formed just before the world shut down in 2020.  Rather than dwell on not being able to bring their collective talents to the stage, they started the socially distanced writing sessions that bought the plot for the house they were about to build.

Each man brought a different musical path to the band, and you can hear them all as their eponymous album unfolds: eclectic influences ranging from classic rock, funk, emo, nu-metal and melodic rock are mixed perfectly across the ten songs and brick-by-harmony-laden-brick they build a unique sound that transcends all of the aforementioned genres.

This House already stands on rock solid foundations on which to build a successful career in the music scene, as critics’ reviews and endorsements confirm and established rock star Danny Vaughn attests.

Dave Ling (of Classic Rock) called This House We Built an “immensely promising quartet playing a confident, summery, sometimes funk-fuelled style that will leave you grinning from ear to ear”, whilst Rob Evans (of Powerplay Rock & Metal) called their eponymous album “The best independent album I’ve heard this year.”

Ross Macdonald (from Rockfiend) echoed such praise, proclaiming “This is, without a shadow of a doubt, the best unsigned independent rock release you’ll hear this year.”

Danny Vaughn, lead singer of Tyketto and successful solo artist, has also been impressed by This House We Built, taken them under his wing and become something of a mentor to the band.

“My first encounter with This House We Built happened last year whilst playing an acoustic concert of my own in Whitby,” says Danny, “About 3 or 4 songs into the show, I couldn’t help but notice that some cheeky person was singing harmonies to all of my songs. And they were good!

“Afterwards I got to meet the culprit — one Scott Wardell — and he told me about his new band which was put together during the COVID lockdown. He said that they had written and recorded an album off of their own backs and then gave me a thumb drive with that album on it.

“So, eventually, I bit the bullet and put on the album, hoping for some bright spots that I could talk about when next we spoke. But this was good! As each song unfolded, I kept saying to myself, “Well they can’t keep this up!” But they did. The album does what I love most in all truly classic albums: it takes you on a journey of a variety of emotions and styles.

“I’m honoured that they will be supporting me on several dates of my upcoming UK tour and I have every confidence that they are going to make a serious impact on the UK rock scene.

This House We Built are now looking forward to shows with Danny Vaughn and are booked for The Call of The Wild festival next year. With two videos in the bag and more singles to come, the boys look like they’re gonna blow the roof of the house they’ve built.

Check out the video https://www.youtube.com/watch?v=fIsbwao1_2M

This House We Built is now available on all digital platforms