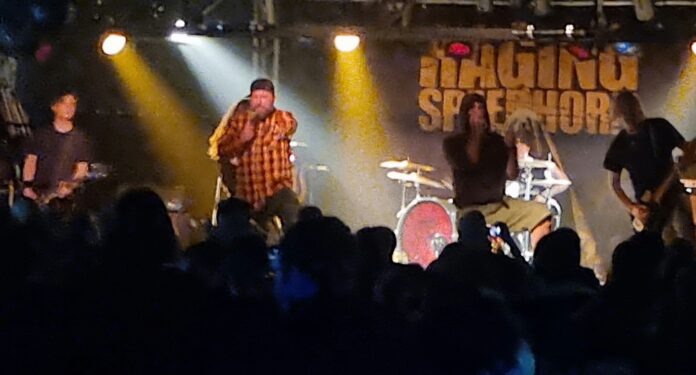 Time flies, and its easy to forget just how long InMe have been doing this: “I’m 40 now!” smiles a sweaty Dave McPherson, “this is not getting any easier!” Yet, for all the glib phrases you use when writing these reviews, this is a man that loves – and dare I say – needs to be on this stage. The last time I saw InMe, in the autumn of 2019, someone yelled “I love you Dave!” to him and he’d replied “I am glad, as I hate myself. It makes for good music, though.” Here, something similar happened and he shot back “I don’t. I love everyone else, instead”. Then they play “Neptune” and smash it out of the park.

If the struggles remain real, then the music remains superb. That’s one thing you can never forget with InMe, its all over their hour here. “Safe In A Room” (and maybe it’s about how they feel on tour?) from a record getting on for 20 years old, and “Blood Orange Lake” from 2020’s “Jumpstart Hope” are not that much different, they are bound by the same class, but there’s not many bands who mix the visceral and the raw with the melody of work like “The Next Song” in quite the way these Essex Boys do.

“So You Know” is prefaced with a speech from McPherson about how he’s loving every moment of the tour but dreading it as it means its closer to ending and that seems to be the emotional tightrope this walks.

There’s a moment of real poignancy with “All-Terrain Vehicle” being dedicated to Dave’s late father, Sandy, but there’s a celebratory air with old tune “Firefly”. Some of the really old stuff is delved into with “Underdose” and its b-side “Gelosea” joined together, and as “Faster The Chase” ends things it does so with the thought that you don’t have to be playing stadiums to have a sound that could fill them.

“We’ll see you next year!” exclaims the singer – as the crowd chant “one more song” for an encore that never comes – “new album, new tour.” That’s wonderful news, but you suspect no-one will be happier about it than Dave McPherson himself.

After InMe exit the stage, as it often does at their gigs, Bon Jovi’s classic “Always” (this is not ironic, I love the thing) plays. 450 or so heavy metal fans go all kinds of crazy and sing along.

Half an hour later, Corby’s biker gang, hooligans, hardcore sludge metal punks (take your pick here!) enter the stage in a swirl of feedback and what goes on for the next 60 minutes is about as far removed from the safe, anodyne world of JBJ as you can get.

Back in 2020 they’d put out “Hard to Kill”, their first one without Jon Loughlin, and they begin with one from that. The title track, as it happens, and maybe that’s their mission statement. The band who remains throughout everything chucked at them.

They only have two speeds, do Speedhorn. Fast and crushing. Sometimes the two happen in the same song “Fuck You, Pay Me” is vicious, and my god! Its breakdown is a beatdown. With a concrete block.

New singer Dan Cook (“…Kill” was his first album with the band) is a dervish. An energetic presence alongside the more brooding Frank Regan. It makes for an interesting contrast, especially as Cook does the screams and the guttural all at once.

They are here to have fun, though. Gordon Morrison (the history of the band is complicated but he’s been on every album) strips to the waist before “Iron Cobra” (“look at that! We mean business tonight!” offers Regan) and the brilliant “Motorhead” is about “some dude in a shitty band”.

For all the bluster, the energy and the maelstrom, the songs are what keeps getting people to come back, and this is a unique sound. “Hate Song”, “Redweed”, and perhaps the best of the lot “Doom Machine” come and go in a blur.

The latter is something of a turning point, however, as Cook disappears for a crowd surf, but loses the sound from his microphone. Now, remember what I said about Speedhorn taking on anything you threw at them? Well this is a band with two vocalists and one mic, right? So they play some kind of bizarre baton relay thing for a bit in “Superscud” and “Fuck The Voodooman” before things return to normal for “Hammerdown” and the mighty slab that is “Thumper”.

In the last year, Raging Speedhorn have been out with Napalm Death, Skindred and Sepultura to name three, which is why although this bill looked an odd pairing, it was always going to work. InMe love being on any stage and when you are as proudly outsiders as RSH then by fitting in nowhere, you can play anywhere.

“We are the lads from Corby that you’d see in a bar and hate!” Regan had said, before continuing “….but we make great songs”. That’s all that matters.

Previous article
A PERIOD OF AUSTERITY
Next article
HOUSE MASTER