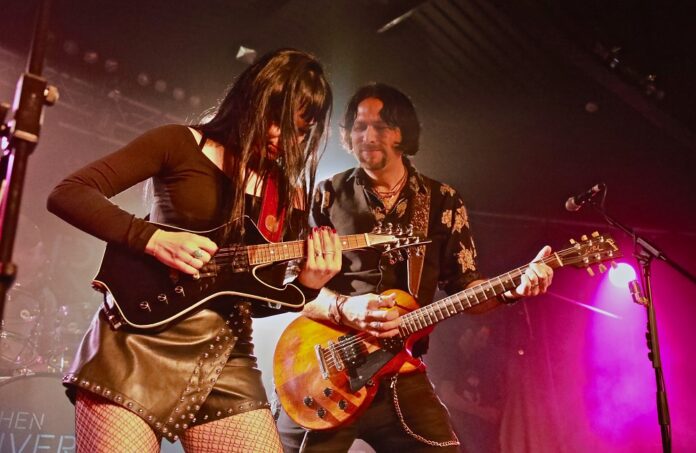 “This is usually where I’d introduce the band, so I’ll introduce the guitars instead,” so says Troy Redfern. I’ve seen Troy four times in the last six months or so, three of which have been solo, as he is here. There is not an artist that I can think of that can switch between the two so effortlessly and with such great effect. This set is the one he’s been doing in the last few support shows. “Scorpio” proves the old adage that the best songs can transfer to other formats, and his take on “John The Revelator” makes it as if he owns that one too. “Waiting For Your Love” and “Sanctify” both from the brilliant “The Fire Cosmic” record from last year, mix with the classic “Voodoo Chile” and as much as this might sound like hyperbole, the way Troy Redfern plays the guitar with such a primal aspect but such a skilful touch puts him in at least conversation with the greats. There’s something special about Troy Redfern, you see him so often at shows that you can perhaps take it for granted, but nevertheless, he is a real talent, with a mystical air perhaps, but my, when he plays those guitars there’s no one better out there.

To begin, if we may, at the end. When Rivers Meet are playing “Testify” as their last tune. Grace Bond is – as she has been doing most of the evening – grinning. The sort of smile that you can’t fake, the sort of smile you mean, that comes from within. The song is, of course, fabulous but this seems to mean more.

The reason, perhaps, comes from something that Grace had said earlier in the set: “did you see our van out there?” she enquires. “We were driving around to gigs in that before lockdown, and there were often five people there…..this is amazing!”

For just over an hour and a half, in front of a packed crowd, When Rivers Meet –  the band Bond and her husband Aaron formed –  and then spent writing songs for years before realising that what they should be was themselves were indulging in something close to a victory lap.

From the moment they began with “Did I Break The Law” and the even better “Walking On The Wire”, this is clearly a band that is on the cusp of something.

Lockdown (and I suppose in this respect they are pretty much outliers) seems to have done them the power of good. Their live streams were popular and their latest record “Saving Grace” has just won the Planet Rock album of the year (“we beat Iron Maiden!!” says Grace, with an air of incredulity) and its “Battleground” is something of a lockdown anthem.

“Don’t Tell Me Goodbye” has some fabulous harmonies with Grace and Aaron singing together, and Aaron is a brilliant guitarist. His slide work, his Cigar Box playing, are as good as it gets, and the band do their “Thunder homage” of “Free Man” before fantastic version of “Innocence Of Youth” by the band – and the band is important.

This is the first time they’ve been out with more than the pair of them and what a couple of additions Roger Inniss (who’s played bass with everyone) and James Fox are. There was a tweet not long ago where Grace had said they had made WRM sound more “us” and you can see what she means, Fox even plays keys on the stunning, haunting “Bury My Body”.

It’s songs like that, that highlight the fact that this is not a conventional blues band, and there’s a mystical quality at times, a folk one at others (particularly when Grace plays the violin) but they are able to balance this out so well by mining some primal instincts on “Friend Of Mine” before a rambunctious rocker in “We’ll Fly Free” sees Grace in the crowd (“while you’re out there babe, I’ll have a pint” suggests Aaron).

That’s all the sides to the band. The musicianship, the fun, the bond (no pun intended) and the inescapable fact that they are at the top of their game – or are they? It feels there’s so much more to come as “Want Your Love” gets them to the encore.

They deserve an encore too, “Never Going Home” seems to underpin how much they love being on the road, and their standout moment “Testify” is somehow better here too, which is where we came in, as it were.

If ever there’s a band who looks like they are having the time of their lives onstage its this one. If ever there was a band that seemingly is intent on making the most of every opportunity then When Rivers Meet are that. Their joy is so infectious you cannot resist them even if you wanted to, and they have the talent to ensure that even these venues – an upgrade on where they used to be – will not be big enough to hold them again.