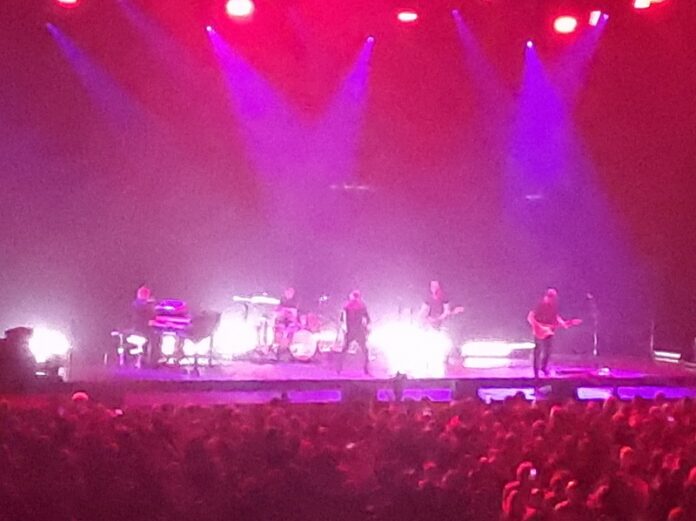 Second song into his set, Bryan Adams knocks out “Can’t Stop This Thing We Started” and a couple of rows in front of me there’s three women of let’s say, a “certain vintage” who get up and start dancing, and good luck to them. In so doing they conform to just about every cliché of what the outside world thinks of Bryan Adams. The housewives choice, the big hits, the inoffensive soft rock.

The real truth of Bryan Adams, though, is that he has just got a knack of writing big rock songs made for big venues (and by the way, he’s just done three nights at the Royal Albert Hall and they don’t give them away) which sold in millions and connected with many more.

As he pointed out himself in the first song tonight, he “plays kick ass rockin’ music, with a kick ass rockin’ band” – that’s the chorus of “Kick Ass” (which fulfilled, as MV predicted, the opening of this show) and it sums the rest of the near two hours up too.

To wind back not to tonight, but to 1984, and before Bon Jovi changed my life two years later, there was a record called “Reckless” that I got out of the library about seven miles from where Bryan Adams is playing here. It was sensational, lets be honest and he plays enough of it here. “Run To You” and “Heaven”, both from it,  are chucked in like they don’t matter, they do.

In between there’s “Shine A Light”, which sees mobile phones torches burn bright (“it should have been the shine a light tour when we booked it, but we got derailed by a virus” offers Adams) and you know what? It’s good that this gig isn’t just a nostalgia trip as there’s so much quality stuff in the later years, not least “Go Down Rockin’”.

However, look, there’s some songs he simply has to play. “It’s Only Love” (“I recorded this live with Tina Turner, right here in Birmingham …and tonight ladies and gents……she’s not here!”) is one (and guitar player Keith Scott does the job brilliantly) but “On The Road”, the celebration of being able to play live again from the new “So Happy It Hurts” album seems to underline the vibe here.

Right in the middle, like the old pro he is, there’s a couple of huge hits. “When You’re Gone” (minus Mel C) and that one about doing everything that was on that film, you know it, it was number one for about 47 years.

He looks for a “wild woman” in the crowd for “If You Wanna Be Bad You gotta Be Good”. He finds two, and they enjoy themselves on show to 10,000 people, before an old tune in “Rebel” (not one you’d have thought of, but it was cracker) and then “18 Till I Die” gives way to the one that got me here, in a way, the one I loved 38 years back and still do “Summer Of 69”. My goodness, its everything a big rock song should be, and there’s boobies on the video wall as it plays, so there’s that as well…..

He finishes with “Cuts Like A Knife”, (after a crowd request for “Please Forgive Me” sees that played) and it’s a crowd singalong, before a lengthy encore begins with the new album’s title track and the lovely “These Are The Moments That Make Up My Life”, which celebrates the little things that we all missed, which is what this show does so well, it connects.

The band leaves, leaving Adams for a couple of solo acoustic numbers, in “Straight For The Heart” and the mega smash “All For Love” – it might, on one hand, be a low key end, but on the other its such a warm one, and there’s a real warmth throughout, lets put it this way, when Adams waved at the crowd at the end, there’s a lot waving back.

And that is how you sustain a career for 40 odd years and still play mega venues and make people dressed in Iron Maiden tshirt’s, those who haven’t been to gigs in years, people here with children and everything else you can imagine come together. You have brilliant songs, and they resonate in many different ways. Nothing more, nothing less.

Or, in short, you are a kick ass rockin’ band who makes kick ass music, like Bryan said himself.