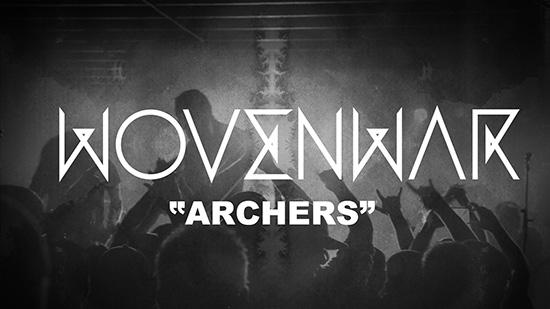 San Diego’s Wovenwar, recently performed a special show at Brick By Brick on July 10th. It was an intimate show, full of the band’s friends and family, and they took the opportunity to film a portion of the set for a new video. “Archers” is streaming now on YouTube . The video was shot by Josh Knoff and directed/edited by Nick Hipa.

Hipa adds: “Our video for “Archers” is cut from live footagefilmed by Josh Knofffrom our recent hometown show at Brick by Brick. The lyrics heavily reference specific themes and songs from Shane’s previous band (Oh, Sleeper) as a sentimental nod to how that chapter in his life was unforgettably formidable. With that in mind, it felt appropriate to create a visual edit captured from our venue in a room filled with quite a bit of family and friends… it kinda just completes the whole vibe as positively nostalgic.”

Wovenwar‘s self-titled debut was released in August of 2014 and landed at #36 on the Billboard Top 200 charts. On iTunes, the album peaked at #2 on the rock charts, and #1 on the metal charts during its week of release. Revolver Magazine heralded the album as “more multifaceted than anything by As I Lay Dying,” and Decibel Magazine added that “WOVENWAR sounds confident, vital, and even liberated on this splendid debut.”