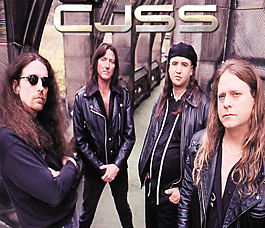 Forgotten metal legends return
CJSS has just announced that they will be performing one reunion show at Bogart’s (www.bogarts.com) in Cincinnati, Ohio on October 9th. CJSS stands for the band members names:
David T. Chastain– Guitar
Russell Jinkens- Vocals, Guitar
Mike Skimmerhorn- Bass, Vocals
Les Sharp- Drums
In the late 80s the band released Metal gems: ‘World Gone Mad’ and ‘Praise the Loud.’ The band use to regularly sellout Bogart’s on a monthly basis and this show is something that most fans never thought they would see again. It is being booked as “Metal Forever! One Last Time.” This show is not to be missed if you live in the area. Tickets have just went on sale! Buy early to be sure you get in!
www.leviathanrecords.com