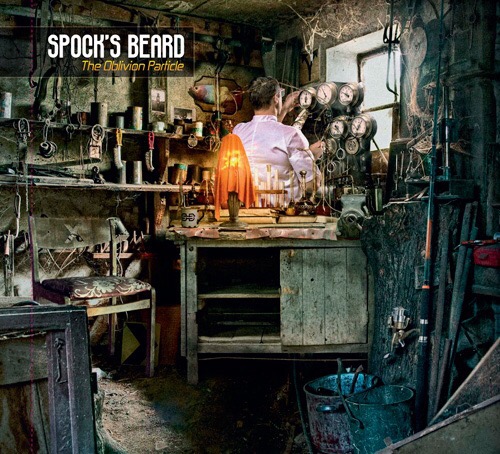 Those who thought that Spock’s Beard were on their uppers after Ted Leonard was ushered into the mic stand after 2010’s “X” were made to eat a very large slice of humble pie when the “Brief Nocturnes and Dreamless Sleep” record which emerged a couple of years later turned out be something approaching a career high. Spock’s Beard had needed to confound the critics once before, of course when Neal Morse decided to follow his Holy Path, but people still seemed to doubt them.

Perhaps that’s because compared to some of their obvious contemporaries, SB continue to fly under the radar, and in many ways, that seems to suit them just fine.  It means they can go about their business in their own typically quiet way, allowing their wonderful music to do much of the shouting on their behalf.

“The Oblivion Particle” finds them in rather curious mood. Because whilst on the one hand it is gloriously overblown – and in this regard the opener “Tides Of Time” lays down a marker very early – it doesn’t ever feel like it’s a bloated affair. Only one of the songs, the slow building, methodical “To Be Free Again” clocks in at over 10 minutes, which for prog metal almost verges on the punk rock. Within this, however, frequently you feel like you’ve drifted into a soundtrack for a film that hasn’t been written yet.

Much of this is down to the incredible work of keyboard man Ryo Okumoto who takes top honours here more or less throughout, as whole songs appear to be built around his dreamy passages, with “The Center Line” especially impressive as what amounts to almost a palette cleanser before the album’s final act.

Elsewhere there is some fine folky acoustics about “Hell’s Not Enough” which is initially stripped bare and possesses a fragile quality that may not always be obvious. Spock’s Beard also set another proving that although they’ve ditched the multi-part epics, they can write a storytelling song better then most and when it all comes together as on the album high point of “Bennett Built A Time Machine” where the hero of the song uses his invention to fix his own life, it’s almost prefect.

The lush – but short – stylings of “Get Out While You Can” give the band chance to stretch out over a harmonic piece that in common with everything else here is magnificently executed.

This is not a record that seems spontaneous. Instead you get the sense that the men involved have planned everything to the very final detail, and it is to their credit that “The Oblivion Particle” never feels cold or clinical like some records of this type do.

Instead there is a warmth which permeates throughout, and as the gorgeous, clever harmonies of “Disappear” ends things with the band as well as the listener searching to reach some mystical horizon, it’s a journey that is more than worth taking.

A simply magnificent collection – their run of form shows no signs of ending here.