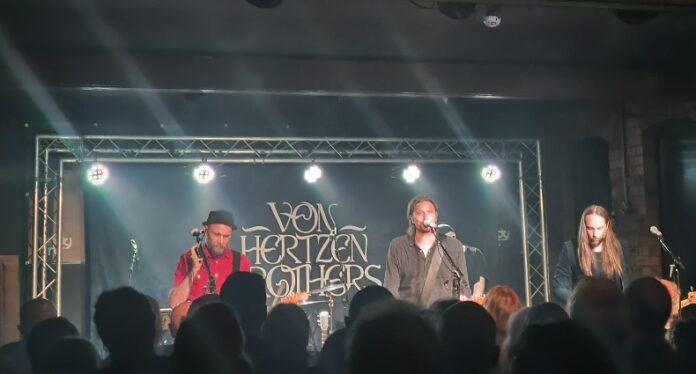 There’s a really nice moment at the end of the gig, when Mikko von Hertzen invites Ethyrfield onto the stage for a joint bow and group (puns intended) hug. It’s the last night of the tour tonight and the young south west trio have been on all the shows. You can only imagine what they’ve learned, however, more important than that is how good they are. “Progressive Rock” they call themselves, but that’s not strictly it. Not really. They are, by turns, heavy, melodic and have a sound all of their own (in short, then, they are the perfect support for VHB). The Cornish (they are from Devon by the looks of it, but Cornish is their name) brothers and Dan Aston on drums are confident in their own abilities too, and given songs like “Free The Dog” and “The Hunter” well might they be. The truth is, that yes, while the progressive thing might be a neat catch all, they have “Bitter Wishbone” which takes its twists and turns, but they also have early stuff in “Bag Of Bones”, which Ben Cornish reckons is the first song they ever wrote, which is almost proto grunge and a lot more raw than some of them. This is a band, though that is so young that it could go anywhere and be anything. You’d say they were brimming with potential, were it not for the fact that Ethyrfield were so good right now.

The internet has taken the fun out of most things, and gigs is one of them. We all look at Setlist.FM, let’s be honest. MV had done it before the Von Hertzen Brothers show and it was with a sense of great excitement that we turned up in the Black Country expecting a wonderful couple of hours.

We got that, for sure, but it was entirely typical of VHB, those mavericks with a sound that you can’t pin down other than to bluster “but they’re brilliant”, that the night they gave us wasn’t the one we were expecting at all, given that they’d shook things up.

A couple of months ago the band released their wonderful “Red Alert In The Blue Forest” record, and it is a mark of their belief in it that so much of it is played here. The open with “Day Of Reckoning” – which is the first track on it – which is followed, just like it is there with “Blue Forest”,  and continuing the theme of playing their newer material, 2017’s “Jerusalem” gets an airing.

The five piece, though, have always been this good? Are they prog? Are they rock? Are they punk? Are they metal? Yes. That’d be all of them, but you can add a dollop of psych in that too. You hesitate to call any outfit unique but this one really is. And why? That bit is simple: they are simply stunning musicians, but also there is such a warmth about them. There’s nothing clinical or cold here.

“All Of A Sudden, You’re Gone” – the opening single, if you will, from “….Forest” is full of glorious harmony, but almost sounds like a mini opera. They get heavy on “You Don’t Know My Name”, and their folk side comes to the fore on the “The Promise” (Kie Von Hertzen gets his mandolin out) but the suggestion that they just do whatever they need to do is underlined by the arena filling chorus of “Sunday Child”.

“New Day Rising” is one of the best songs they have (and it’s been the encore in many of these gigs) and is a wonderful highlight here, as is “Flowers And Rust” – there won’t be a better one-two anywhere.

“Northern Lights” shines here, transporting you to the clear skies of Northern Europe and its so gloriously whimsical, and from the other end of their scale comes “Coming Home”, and the vocal interplay between the brothers is so much fun.

The best moment (perhaps in keeping with a set that you weren’t expecting) however, comes from a song that they leave until the end. The epic “Peace Patrol” – all ten minutes of it – is quite stunning, and what musicians these five are. Sami Kuoppamäki’s drums are sensational, as is Robert Engstrand, who’s keyboards underpin the whole night almost.

With that, Mikko calls their young prodigies to join them, and yet there is no real sense of a torch being passed on. Quite simply, Von Hertzen Brothers are as good as it gets and when it comes to …..well whatever it is you call it that they do, they are untouchable. If we don’t know what to call it, lets call it superb.