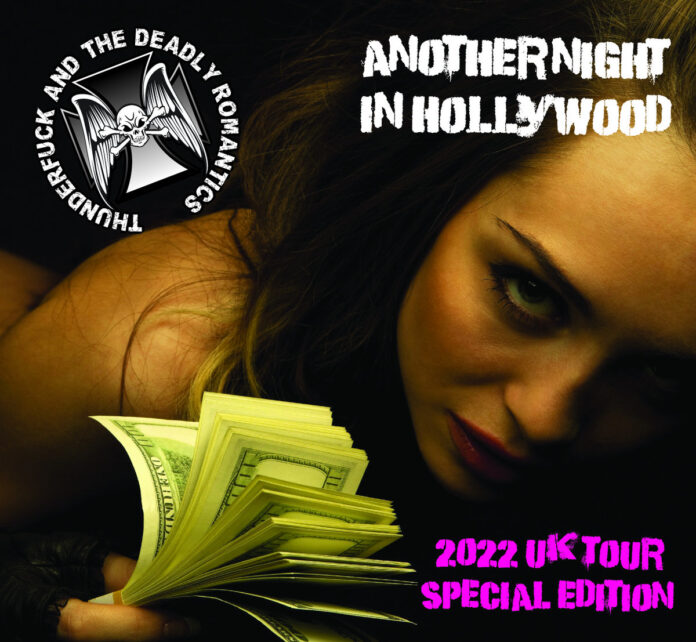 The Deadly Romantics (full name: Thunderfuck and the….) very, very nearly didn’t get their EP reviewed on this website.

The email with the stuff about the release on came from a fella called Bruce. Now I don’t know which of the band “Bruce” was (my money is on guitarist Cumshock) but I do know this. “As Freddie Mercury once said…Thank you Darlings.” Now this website only mentions Q***n in the most extreme of circumstances (like if we had a safe word it’d be “I really like “We Are The Champions”, then everyone would know we were being subjected to brutal torture).

But here is the skinny, everyone. As well as mentioning the worst band in the world Bruce also said this: feel free to love or hate us.

That’ll be the reaction to “Another Night In Hollywood”. You’ll either love it or hate it. There will be no in-between. Right minded people will hate it, me? And all the other weirdo’s, freaks and outsiders? We’re gonna lose our shit.

This thing, frankly, is the tits.

Five songs that are just about the most offensive, yet catchy sub Faster Pussycat stuff you ever did hear.

From Canada, via Glasgow, “I’ve Done It All” begins with a solo from Douchebag or Cumshock (I don’t know which and I don’t care) but when a song begins with the words “I’ve shit myself on Jagerbombs” you kinda know what you’re getting.

The next one rails against bands that in the opinion of TFTDR, are generic and shit. “Just Another Song” it reckons, it boils it all down to these words: “We never touch weed, cos our favourite band’s Creed”. Now, if I was a betting man I’d wager that this is about bands that I happen to love with the initials BSC, MT and N, but this is the most withering of put downs (I hope its about Shinedown and Alter Bridge……). And Deadly Romantics do not strike you as a band who gives two shits.

Now things get interesting, lets say, on the chugging “Rockstar”.  As a tee-total bloke who thinks Omega 3 tablets are a bit extravagant when it comes to drugs, I don’t think it’d be for me, but if you aren’t offended by what the girl he takes home is blowing bubbles with then, frankly they aren’t trying hard enough.

“Get Me Out Of Here” does the chugging punk thing (again). Think UK bands like The Hip Priests and its about the only (semi) serious one here, railing against the modern world. That’s fair enough, as is the truly brilliant “Tribute Band”. It eviscerates the whole culture of bands called “Hi On Maiden”, “Bi-Jovi” or whatever in four minutes. “You wonder why the groupies aren’t sucking your cock” spits Thunderfuck, before concluding “you’re an insult to your craft”. Preach on, boys.

Just when I thought this record couldn’t shock any more, along comes the title track. It’s a glam infused ballad! Opining the changes in Hollywood since the 1980s, and its tempting to imagine Thunderfuck And The Deadly Romantics as the headliner at The Cathouse, perhaps, except even that wouldn’t suit them, not really. More like the alley behind the venue giving Slash’s girlfriend a seeing to while Guns N Roses played. That’s about the vibe.

Either brilliant or awful, depending on how you view these things. This doesn’t exist in grey areas. Thunderfuck and his Deadly Romantics have spent 15 years with not a fuck to give, but still, this is ace, not that they’ll care what I think.