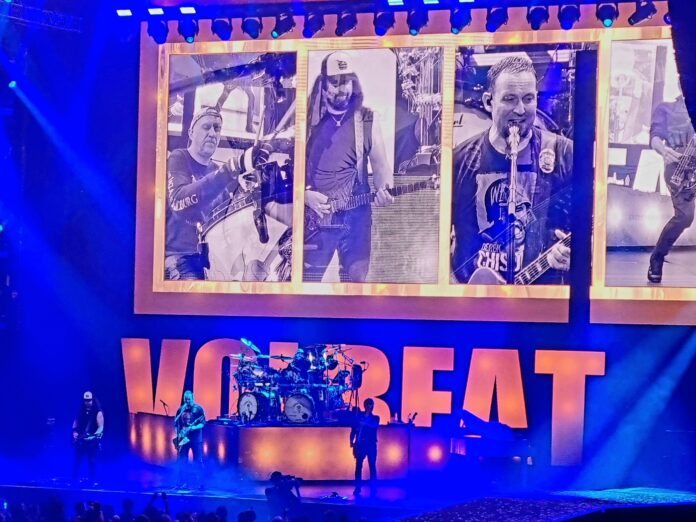 Napalm Death’s presence on the bill probably stretches back to 2013, and Mark “Barney” Greenway singing on “Evelyn” with Volbeat (MV saw him do it on stage with them back then) but even they’d admit they stick out here. “I know you are a little nonplussed,” says Greenway “and that’s ok”. Yet for all that, the self-styled “unapologetic noise band from Birmingham” become a conduit for visceral rage for 30 minutes. From “Narcissus” to the Dead Kennedy’s “Nazi Punks Fuck Off”, they uncompromisingly brutal, yet happy to discuss themes of social justice with the crowd. “Contagion” (“no one has the right to call anyone else illegal, refugees welcome” explains Barney) or “Suffer The Children”, which tackles religious interference in abortion, are typical. “Amoral” from the new album is not it is “a cheerful ditty for us” says the singer. At the other end of the scale come “Scum” and “Death” literal seconds of nihilism. It all adds up to something unique, from Greenway’s performance of jerks and odd movements to the viciousness of the songs. That all being said, though, the likes of “Scum” and “You Suffer” are 35 years old, and there’s one only way you sustain a career in music for that long: you’re good at what you do, and that applies to Napalm Death as much as any other band.

Benji Webbe has always thought he was in an arena, so a set in one isn’t going to phase him. And basically this is about Webbe, the phrase “larger than life” might have been coined for him, and he isn’t leaving this stage until he’s made thousands of new friends. He dances, he cajoles, he insults (good naturedly, everything about the band is good natured) he plays the “party starter” (a sort of keytar) and has more costume changes than Kylie. It is easy to forget how good Skindred’s songs are in amongst all this, “Stand For Something” proves it, “That’s My Jam” – complete with organised singalong – is dumb but irresistible, “L.O.V.E (Smile Please)” is the ballad, but also the mission statement. “Give Me That Boom” is a new one from 2023’s forthcoming album, while “Nobody” and “Warning” are as big as ever. The latter complete with men everywhere waving their t-shirts above their heads (it’s the Bridgend helicopter and it happens at all Skindred gigs). At the end of this, Carly Simon’s “Nobody Does It Better” plays. Others can judge the veracity of that statement. It is true to say, though, that no one does it quite like this.

Back in 2018, Volbeat played the biggest show ever in Denmark by a homegrown act. They are stars all around the continent, like a serious big deal. MV has been watching them for 15 years as they came to the UK and wondered when we’d catch up.

That all being said, then, it is with something of a sense of pride that you watch them do “The Devil’s Bleeding Crown” as opener here. In an arena. With a show to match. This is probably the greatest rock n roll band on earth right now. And they prove it for an hour and 40 minutes.

Everything about this is enormous. The production, the sound, the songs. It is unapologetically bombastic, too. “Pelvis On Fire” is thrilling, and it ticks all those boxes, and then there’s this fact: Volbeat sound like no other band. None. Metallica? Well yeah, sort of, but Metallica never added country, or rockabilly, or this much fun.

In short Metallica couldn’t have written “Lola Montez” or “For Evigt” – which is usually played at the end of the set and still sees the venue showered with confetti here. That it isn’t , is due to Michael Poulsen (the bands founder in 2001) having a cold “(we don’t cancel shows for a cold!!”He reasons), under the weather or not, the renditions of “Sad Man’s Tongue” – replete as ever with bits of Johnny Cash and “I Only Wanna Be With You” – and a wonderful “Wait A Minute My Girl” are stunning. The latter features ZZ Bottom, their horn section and piano player, which perhaps shows how they’ve taken it up a notch this time.

They still have a small show feel, though, even with a walkway that envelops the front section. Poulsen spots a fan in that pit with a Sadus shirt, and asks him to swap it. Sending a roadie to get one. It’s not a moment you’d see anywhere else.

A hurtle towards the end sees “Seal The Deal”, “Last Day Under The Sun” and “Devil Rages On” finish things, but there’s always an encore with Volbeat and its always lengthy, so it is here. “Let It Burn”, a brilliant “Die To Live” before Rob  Caggiano (who has gone full on Dimebag Darrell on this run) is pressed into playing AC/DC and Anthrax. He might have known the Anthrax stuff a bit better……?

“Pool Of Booze, Booze Booza” follows, but its “Still Counting” that you can’t help but think sums the band up. Timechanges, moving from pop to metal in four minutes. That’s what Volbeat do. However just as you are thinking this, along comes some cannons shooting streamers out to snap you from any reverie.

Volbeat are wonderful. But they’ve been wonderful for years and years. This show being such an event, though, seems like their vindication. They can do a show like this in their sleep, but they never seem to take it for granted.

One of the gigs of the year, but more than that, a celebration of music itself, by a band that clearly loves what they play and what they do. Even better, there wasn’t a twee Christmas song in sight.

Previous article
SIMPLY THE NESTOR
Next article
BAND OF THE DAY: DRAKEN