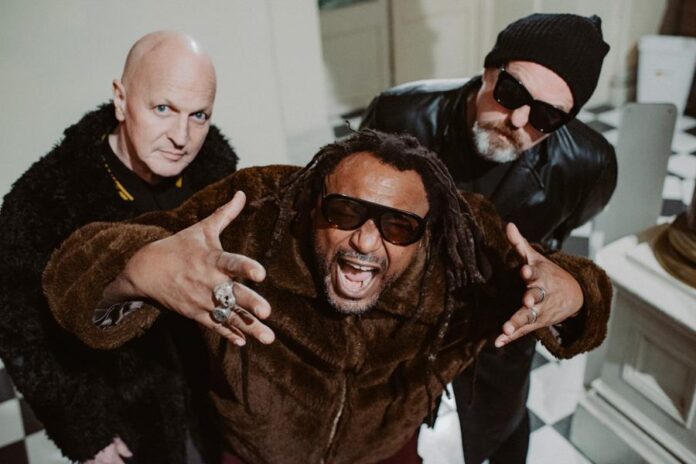 Fusion metal pioneers Dub War have released a new single titled “Vibes In The Place”, the third track to be taken from their first album of all-new material in over 25 years, ‘Westgate Under Fire’.

The hip-hop infused metal track sees fellow Newport resident and good friend of the band Mikee “KRUPA” Gregory take on frenetic drumming duties, whilst groove-heavy distorted guitars propel the track forward alongside frontman Benji Webbe’s (Skindred) rhythmic and powerful vocals. As with the singles that have come before it, the track is a consummate insight into the band’s ability to traverse multiple styles and genres, whilst nurturing a sound which is distinctively their own.

Speaking on the track Webbe says, “Vibes In The Place was one of the first songs we wrote when we got back in a room together. It features that old little Yamaha ha ha ha ha keyboard that we use live right up to this day. What’s particularly special about this song is that a massive friend and fan mixed this track – Mr Rick Will. Rick was down to mix the whole album but due to one thing or the other we went with Richard Jackson.

For me this song is inspired by Talking Heads – I’m sure many will say ‘what are you on about’, but for me it’s definitely got a flavour of David Byrne (I guess it’s the part where I say ‘hold the door’!)

“Vibes In The Place” definitely captured Dub War from back in the day – this track is one of the songs we actually wrote with a drummer in the room, Mikee “KRUPA” Gregory.

This song captures the live element of Dub War and once it’s known by the ‘War lovers, it will for sure be a live favourite..

Sadly after mixing this song, Rick Will past away… So this is a track that means so much to me, Jeff and Richie.”

The new track follows the release of Dub War’s rousing ragga-punk cover of the Max Romeo and the Upsetters’ classic “War Inna Babylon”, which features guest vocals from the legendary Ranking Roger of The Beat in his last ever recording before his sad passing in 2019.

The band also announced their return with a single titled “Blackkk Man“. Released in the midst of the celebration of Black History Month in the US last month, “Blackkk Man” is a furious revolt against racism and a bleak reflection of crucial events from this decade in particular, including the murder of George Floyd. The accompanying lyric video, compiled and edited by Aran Webster, serves to drive the critical message contained in the lyricism of “Blackkk Man” further, putting society’s outrageous double standards in plain sight via news footage and articles.

“Blackkk Man” and their latest singles “War Inna Babylon” and “Vibes In The Place” launch Dub War back into the industry as the band who turned heads with their groundbreaking genre-bending once more. Alongside these potent punk rock-laced track, ‘Westgate Under Fire’ offers up dance infused metal, ragga-punk and sinister metal with exotic beats.