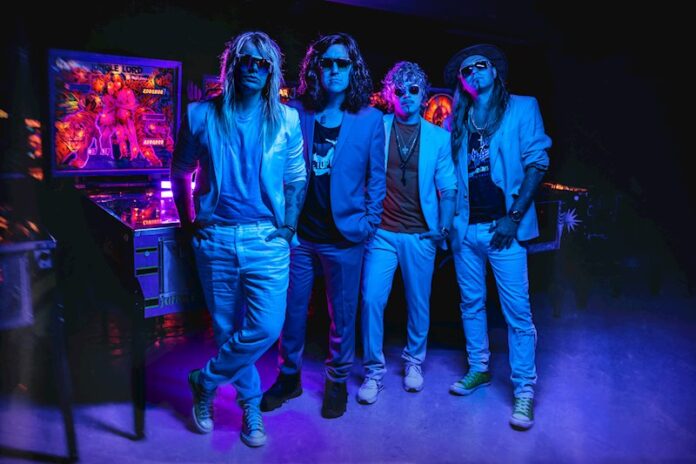 On their forthcoming output, RECKLESS LOVE now re-visit the 80s game worlds. At the center of their sound are 80s themes and the modern dark-speaking world of synth wave, while the band is diving deep into the game world and movie moods of the genre and era. Turborider is high-energy, synth wave-infused rock with an undeniable 80’s touch, and will most likely make you forget the world around you with its infectious hooks!

“Turborider is the title track for our fifth studio album, not only because it defines the change the band has gone through sonically, but also because lyrically it paints a story about rebirth.” VocalistOlli reveals. “That’s exactly what Reckless Love had to go through in order to make it back at all. The couple of years away from touring and the 6 years away from releasing an album have not been gentle and easy for us.”
Listen to Turborider HERE!

“The challenge we faced is reflected on the relentless uptempo beat that drives the song forward, and with the heavy guitars they create a monstrous feel that inspired the lyric that feature a fictional character, called Turborider.” Olli continues. “The character acts as a simple metaphor for the bands music and expression. Gone to hell and back, just to find out that hell has become a part of her, the Turborider sets out to conquer. “More electric than before, a rotten hybrid to the core”. Eventhough, Turborider is definitively on the heavier side of Reckless Love, this tune doesn’t fail to deliver catchy melodies.The song was written very quickly with our producer Joonas “Synthinen” Parkkonen. The vision was clear as day from the get-go. We set out to write an opening track for the album and all we knew was that we wanted it to be like a kick in the stomach, or a puch in the jaw – or better yet, both. When Pepe ripped into the opening riff and Joonas followed with his synths, we had the first demo of the song done in approximately 15-20min. When Joonas was saving the file on his laptop, he asked me if I had already come up with a title for the song. I didn’t even think as the sound seemed to come out of my mouth by itself – Turborider.”

RECKLESS LOVE‘s upcoming Turborider will be released on February 25, 2022 via AFM Records – and besides Digipak and colored Vinyl, the band is offering something very special to their fans: The limited box set will include the Digipak CD, an autograph card and a handheld videogame. Turborider was produced by Joonas Parkkonen (Apocalyptica, Lost Society) and mastered by Svante Forsbäck (Rammstein, Lordi, Volbeat), the pre-sale is now available at THIS LOCATION!

Have a closer look at our selection here: https://shop.afm-records.de/reckless-love/
You can pre-save the album on digital platforms too: https://bfan.link/Turborider