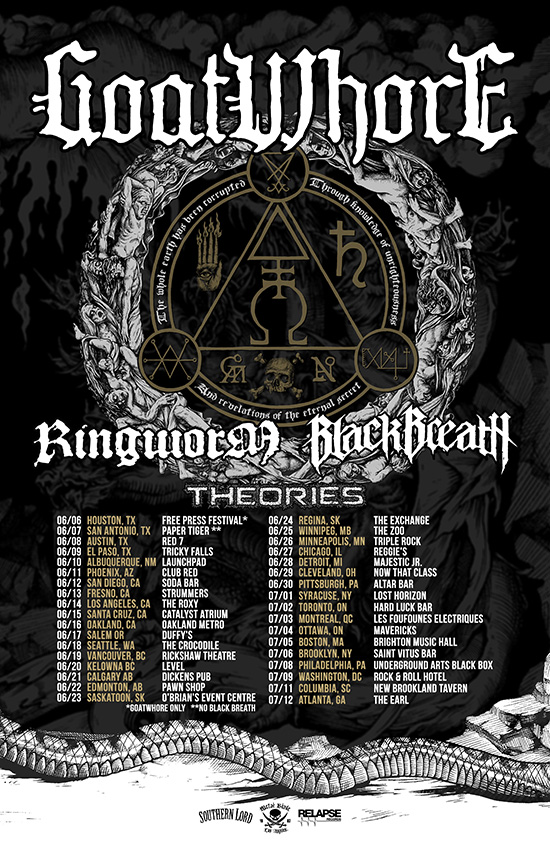 Pacific Northwest death grind unit, THEORIES, is readying to kick off an epic run of live takeovers this Summer. Set to initiate on June 6th in Houston, the band will conquer the stages of over three dozen venues throughout North America alongside headlining labelmates Goatwhore with additional support provided by Ringworm and Black Breath.

THEORIES will be touring in support of the debilitating fruitage of their Regression full-length released earlier this Spring via Metal Blade Records. Captured at The Red Room and The Boiler Room with producer/engineer Derek Moree (The Sword, Pelican, Minus The Bear et al) with mixing and mastering conducted by Visceral Sound’s Scott Hull (Pig Destroyer, Agoraphobic Nosebleed), Regression delivers ten violent psalms of antagonistic, crust-infused death grind centered on the wanton truths of a society gone terribly wrong. “Regression is a honed, utterly off-the-wall experience that is a blast to listen to from both a technical standpoint, and one that’s just looking to rage,” issues Metal Injection of the offering, further enthusing, “Those into death metal or grindcore will find THEORIES much akin to bands like Misery Index, Cattle Decapitation and Pig Destroyer.” No Clean Singing agrees, “Regression is not only a superbly performed assault on your senses, but more importantly, one with more substance and memorable moments than you will find on most records within the genre. Highly recommended.” “Get this fucking album,” encourages Cvlt Nation. “Put it on constant rotation at the highest fucking decibel level you can handle, and then turn it up even higher. Blow out the windows of your house and break down a few walls. Destroy a few precious objects while cursing out your loved ones. Because without a doubt, the arrival of Regression warrants such a violent outburst and response from us all.“HeavyBlogIsHeavy notes, “THEORIES hits so many right notes on Regression that it would be easy to presume this was their third or fourth record. This is a creative and energetic debut from a young band already well versed in this art. Metal Blade really does know how to pick them.” AddsInvisible Oranges, “The ethos ‘more is more’ informs THEORIES’ take on the genre: more guitar solos per song, more disturbing vocal samples, more ignorant breakdowns than the typical-blast-then-pause grind record. Scott Hull of Pig Destroyer and Agoraphobic Nosebleed mixed the album, and punched every instrument into the red. The bass sounds like a guitar and the guitar sounds like the death squeal of some huge cybernetically enhanced boar. Drummer Joe ‘Grindo’ Axler’s snare drums sound as if they could break coconuts, and his cymbals sound like they’re made of Gillette razorblades. Even by grind standards it’s an intense listening experience.”

Check out Regression, online now at iTunes and Spotify.

THEORIES features within their ranks current and former members of Samothrace, Skarp, and Book Of Black Earth among others. Regression is available now via Metal Blade Records:http://www.metalblade.com/theories.