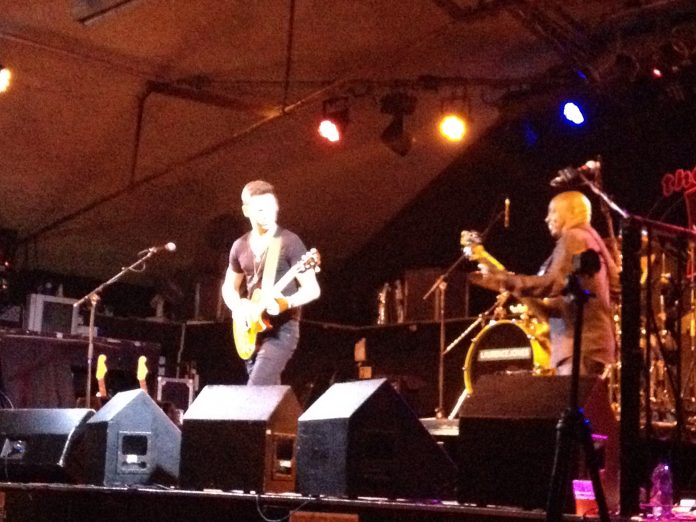 Two of the best of the new blues breed team up

There’s a lot to like about Ali Clinton. He’s got a wonderful, earthy raw voice, he can play the guitar like he was born to do it, and he’s got some fine songs. That’s not a bad list of plusses, is it? The young East Midlander is one of those artists that’s forever touring. He’s been in Uli Jon Roth’s band and he’s been in these parts regularly too – notably when opening for Crow Black Chicken in February. As on that night tracks like “Heartbreaker” and “Second Time Around” are great, huge slabs of bluesy rock, and there’s bags of Hendrix- style groove on offer here. And when the trio stretch themselves out, as they do on the closing “Lost Me” they give hints that they may be just a little bit special.

There’s a story that Jimi Hendrix was once asked what it was like to be the best guitarist in the world. “I don’t know,” he is reckoned to have deadpanned. “Ask Rory Gallagher.”

The tale – aside from being superb – gives some idea of just how special the man from Cork was. And evidently still is. Just this weekend they held a concert in his honour. The organisers asked Laurence Jones to play. Listen to the magnificent title track of his new album “What’s It Going To Be” – opener tonight on the first night of the UK tour – and it’s easy to see why.

The young local(ish) lad has been hotly tipped for years, he was a prodigy of Walter Trout, now he’s ready to leave pretty much anyone for dead. The sheer good time ebullience of “Don’t Need No Reason” proves that.

Jones borrows – rather than steals – from the rich history of the blues. His take on Leadbelly’s “Good Morning Blues” updates the original instead of copy’s while the jam on “All Along The Watchtower” brings out Jimi’s funky side, and self-penned stuff like “Being Alone” races around asking Cream to eat its dust.

Despite his tender years Jones is already on to his third record. The mournful title track from his debut “Thunder In The Sky” opus really hits home here, with the solo outstanding. By contrast “Set It Free” is light and airy.

Jones and his fantastic band – allow themselves one final jam, and “Good Morning Blues” is breathtaking, the catchy “Fall From The Sky” (dedicated “to the ladies”) is just a marvellously constructed song.

There’s an encore, “Whisper In The Wind,” a poignant song that he wrote to be played at his uncle’s funeral, is simple and gorgeous. It’s a rare reflective moment on an evening full of fun, but ever the showman Jones finishes in the crowd, in amongst his people, just him and his axe. The thing he masters so, so well.

There’s an infectious quality about jones. Frequently here, he smiles as if every night he gets to live his dreams. Maybe it’s the fact he battles Crohn’s Disease to be onstage, who knows? But whatever it is, Laurence Jones knows how lucky he is. And he’s not going to waste a second of his life, or an ounce of his talent. Tonight he and Ali Clinton are absolutely superb.

Rory and Jimi may be gone, but the blues ain’t ever gonna die while a new generation carries the torch this well.