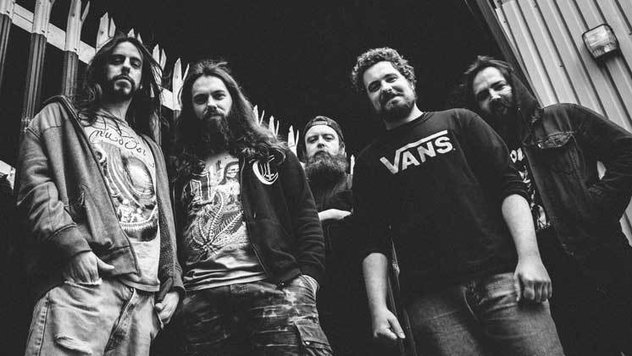 Watch their gore-splattered video for “Vegetarians” and check out what the band have to say about it online at Terrorizer here:

The album was recorded at Foel Studios (Mid Wales) by Chris Fielding, whose previous works include the likes of Electric Wizard, Conan, and Dyscarnate. It was also produced and mixed by him at Skyhammer Studios (Chester) and it was mastered by James Plotkin of Khanate at Plotkinworks (Philadelphia).

‘Anything That Moves’ boasts the band’s highly aggressive style of progressive death metal, which comes with tonnes of megalithic riffs, psychotic drumming, squealing saxophone, and a searingly caustic vocal performance.

The artwork and track listing for the album will be unveiled online in the coming weeks in addition to a music video for their new song “Vegetarians”. After a successful return to the stage in their hometown, Cardiff, Intensive Square are slated to play at The Town House in Jersey on August 22nd. Tickets will be released soon and the band is currently working to organise a string of dates across the UK this summer in support of the release. Watch this space.

MVM’s REVIEW OF THE ALBUM IS HERE