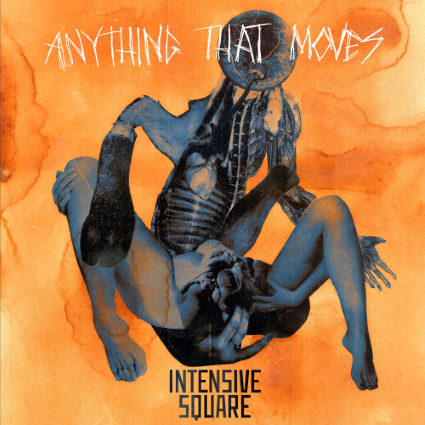 Social media is a rather necessary evil. For all its faults, sometimes you can tell a lot by a bands stated influences on Facebook for example.

Take Intensive Square. On theirs it says they like Pantera, Meshuggah, Crowbar and Mr. Bungle. It also claims that they are “Premium Obnoxious Welsh Metal.”

Sometimes a reviewer isn’t needed, because “Anything That Moves” is all those things – but the band are selling themselves short. It’s also considerably more.

Quite simply Intensive Square are exceptionally heavy and exceptional. Singer Chris Haughey, who sounds like he’s gargling sandpaper and razorblades while drinking a vinegar chaser, is heroically angry throughout most of this. Exclaiming “you stupid ladies part” during in “Vegetarians” (sort of….) doesn’t seem out of place, but whatever it is that has upset him, that anger has been channelled by the other three into something pretty amazing.

“….Moves” sets its stall out pretty early. There’s ominous drums to usher in “The Long Man” and all kinds of musical violence follows. And yet, when it comes to a hook and the ability to chant a chorus, the record scores there too. “Ends” is more of the same, but adds an absolutely crushing pummel of a riff to proceedings, a thought “Rhino Fight” takes a stage further, and stomps around in a wonderfully monolithic way.

The thought that this isn’t quite the record you’d have expected it to be is rather hammered home by its clever – and completely unexpected use of -saxophone. The aforementioned “Vegetarians” has been akin to an iron bar over the throat until it adds its jazz variant, just for wilful fun it seems, and it’s not the only time that guitarist Barnes chooses to take this diversion.

All their ideas of clubbing, punishing heavy metal are pulled together in the last of its eight tracks “King” is slow, its deliberate, with a seething rage behind it, and yet although you suspect it would quite like to kill you, there’s a real amount of groove here.

Intensive Square is packed full of guys who have seen it and done it. Drummer Rich Lewis is in Conan, one of the guitarists, Joe Harvatt is in Hark, it shows. This isn’t some wet behind the ears mob putting their toes in the waters of a debut. This is a band ready to cause a tidal wave, and when you add in Chris Fielding’s usual spot on production job, this release gets pretty close to the “brilliant” category.

As sonic brutality goes, this is as good as it gets.