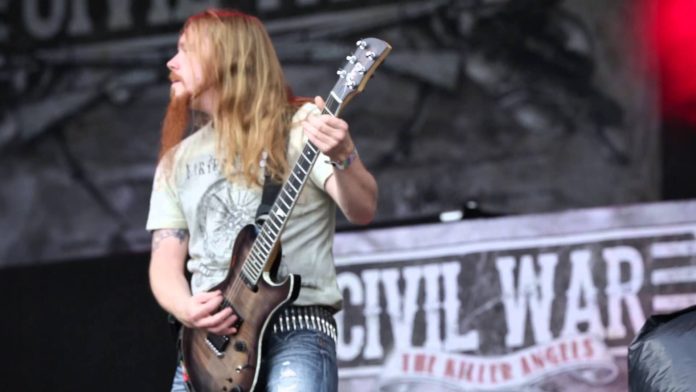 Civil War guitarist on leaving Sabaton, the problems with finding a bass player, and the bands of the 1980’s

After you all left Sabaton, at something of a commercial peak, was forming another band quickly something you always had in mind?
We left Sabaton simply because it didn´t work out between us . We had no plan to start a new band but we knew almost immediately that we did not want to stop playing together and we started thinking about form a new band.

You settled on former Astral Doors man, Nils Patrick Johannson. Nils Patrick feels very much the natural choice as singer, was it easy to get him on board?
Patrick was one of them we talked about when we thought about singers. A mutual friend told Patrick that we were looking for a singer and he said that if we were interested he was interested. We had a meeting and we clicked immediately.

On the history section of the website you speak of Steffan as being the first choice as bass player? Again, was it easy to get him and following on from that, what was it you particularly valued?
I bumped into Stefan and told him that we left Sabaton and we started a new band. He said that if we needed a bass player we just needed to call him. He had worked as a roadie for us in Sabaton several times so we knew him well and he felt like the first choice.

What is the situation with bass duties at the moment?
At the moment we have no bassist. We chose to part ways with Stefan and currently the bass is on backing tracks. To find new members that work together can be hard. We had no one in mind that we knew would work and we have no time and energy to have auditions at the moment. It is no secret that most bands these days have something pre-recorded live so it´s not a big deal, I think.

Moving on to the more recent past, you must be delighted with the way your music has been received over the last few years?
We are very pleased that people think our music is good and that it is not because of our background and the previous bands we come from. We were happy with “The Killer Angels” but it feels like we’ve found ourselves with “Gods and Generals”

About the Gods And Generals record: tell us a little of the writing process?
Patrick and Myhr came up with song ideas and then we all took part with the arrangement. Most arrangements are made during the time we recorded the album.

Perhaps a difficult one to answer, but were you ever worried about people seeing you as Sabaton MK II effectively? Were you ever tempted to go a different way with your songs?
No, not worried. We knew that we would be compared with Sabaton, but there is no one who sounds like Joakim so whatever singer we would have found it would have sounded different. The music can of course have parallels but it would be strange if there were not after all 13 years in Sabaton. But I still think we have found our own way.

What next? Are their plans for a UK tour for example
We are currently touring with our new album Gods and Genrals and we will go out with a headline tour soon. We are no band that wants to be on tour all the time so we plan our gigs well . We want to come to England but for the moment there is nothing planned .

I’m always interested in what drives a band to continue. Do you still retain your ability to be fans?
Music is in the blood in a musician and I think its hard to just stop with music. In one way or another you will always play music. Ofcourse you always be a fan. If you dont have any bands or musicians you like then you dont have any insperation for your own music.

What inspired you to make the music you do?
I like the most of what came out of the 80´s. I like how riffs was played and how melodys was the centre of a song. There are not many bands from today that can be compared to the old bands.

Can you remember the last record you bought, and are there any bands you have particularly enjoyed recently?
No I dont remember the last album I bought but the last one that blew my mind away was Lost Horizon-Awakening the World. They had their own sound, good songs and a fantastic singer.