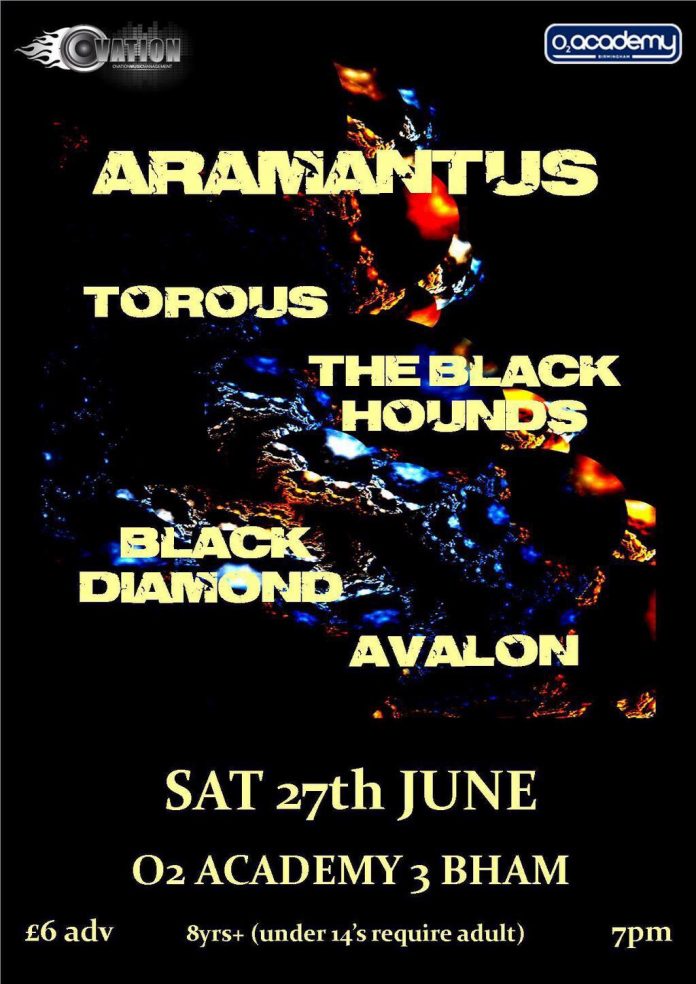 Avalon deal in meaty riff driven rock n roll. The Black Country boys are no strangers to the hook either and on their “Dirty Weekend” single it all comes right in a most agreeable way. With crunching guitars and a neat line in melody expect to see them higher up bills like this in future.

Black Diamond are using this as their farewell party. Two of their number are off to uni soon and this is their last gig. Academic sojourns apart, it would be a shame to lose the boys from the scene altogether, as their effervescent hard rock brims with youthful enthusiasm. They finish with covers of Airbourne and Led Zep, and what they do – or did – is a neat blend between the new and old.

“I could be sat at home watching some shit on the BBC, but instead I’m here with you….!” Exclaims The Black Hounds singer Ant. To be fair, even if there was something on, they’d be worth going out for. Quite simply the four piece sound huge tonight. There’s nothing complicated here. Just superb songs with some heavier than you’d think guitar lines. There’s an impressive thud about tracks like “Clarity,” while “Hit And Run” barely restrains itself, becoming a singalong in the process, and “Call To Arms” almost implores you to get Devil Horns right in the air immediately. “Mr. Mayhem” ends things here in suitably raucous fashion, and as the Black Hounds are apparently ready to step things up in the rest of the year, it could be a fun few months…. and Ant might need to get used to missing the tele.

Torous are here to launch their new EP. The local trio’s new one is a stunning piece of work – reviewed on these very pages this week. In typical style, however, they’ve decided to bend the rules. So they start with a couple of older tunes first, and my, how they launch into “Tolerate X” tonight. MV has seen them many times over the last 15 months, but there’s a real edge to them here as they deliver an incendiary display. Bass player GMT and drummer Tom seem ready to wage war on something during the medley of classic metal and their passion is more than replicated by singer/guitarist Marc, who lets himself loose to great effect as it climaxes with “Creeping Death.” But this ain’t about covers – however much fun they are – tonight is about the “Dried Bones EP” and the first they play from it “Occam’s Razor” is wonderfully intense. The title track of the record is a soaring affair, with a fine, catchy chorus. They end with “….Bones'” closing epic, the brilliant “Don’t Slip” and it’s worthy of being a showstopper – more than that it exemplifies their skill as musicians and songwriters. Torous are a band who is delivering on the promise they appeared to have.

MV hadn’t seen Aramantus for a while, but it’s a confident five piece that take the stage. One by one, each playing a few seconds alone. Their opening gambit “Madness” is packed with heavy swagger to match. The young band are superb musicians and are developing a real stage presence too. “Voices” sees them stretch themselves a little more. They’ve begun to make good on the potential they very obviously had when we first witnessed them a year or so back. The funky turn they take still comes as a surprise, but the brand-spanking new “After Seven” is fast and furious, while even the older material they dip into seems to have matured with the the band. One of these the punchy “Broken Trust” acts as the last song here, and is given a new lease of life. We can still expect big things from Aramantus.

These bills, as we always say it seems, merely re-enforce the view that the Midlands scene is thriving right now. The five bands here tonight are all at different stages of their careers – with one of course calling it a day – and they perhaps have different aims. Put them together, however and it made for a fine old night.