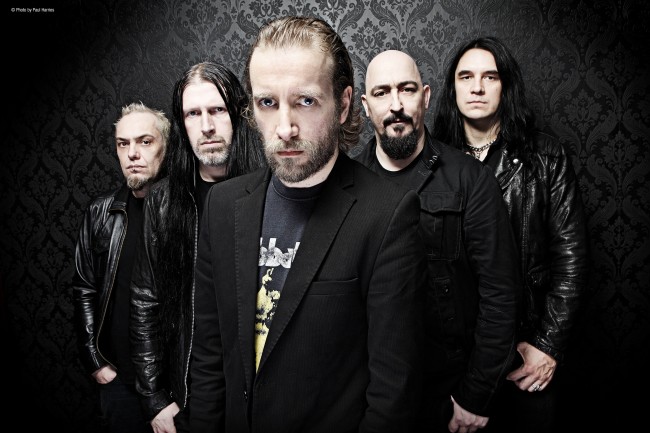 Stellar support cast join Brit legends this Autumn
Pioneering doom legends Paradise Lost have announced that they will be joined by Tribulation and Lucifer on their upcoming UK tour. Frontman Nick Holmes comments: ‘Our latest album has been seen by many as the heaviest that this band has produced in years so it seems only right to have support bands that will set the dark and demonic tone for the evening ahead. We are pleased to be joined by the supreme swedish death-metal band Tribulation and doom quartet Lucifer.’
Paradise Lost returned with opus number fourteen “The Plague Within”, in June. With this album they once again refined the chemical equation to their sonic alchemy with the kind of creative invincibility few can afford. It’s a collection of songs that will surprise even the most seasoned of fans in its ambition: a monochrome miasma of morbidly uplifting anthems and heart-aching melancholia.
The Plague Within UK Tour 2015 w/ Tribulation & Lucifer
30.09. UK Manchester, Academy 2+
01.10. UK Glasgow, Garage+
03.10. UK Wolverhampton, Wulfrun Hall+
04.10. UK London, Koko+
12.11. UK Liverpool, 02 Academy*
13.11. UK Nottingham, Rock City*
+Tribulation & Lucifer
*Lucifer only
Tickets are on sale now – http://myticket.co.uk/artists/paradise-lost
Tour poster – Link
If you missed the two previously launched tracks from “The Plague Within”, click the links below:
Beneath Broken Earth: http://smarturl.it/beneathbrokenearth
No Hope In Sight: http://smarturl.it/nohopeinsight
Physical formats for the album are available for order:
http://www.omerch.eu/
http://smarturl.it/tpwCMDISTRO
Digital orders:
http://smarturl.it/tpwITUNES
http://smarturl.it/tpwAMAZONMP3
http://smarturl.it/tpwGooglePlay