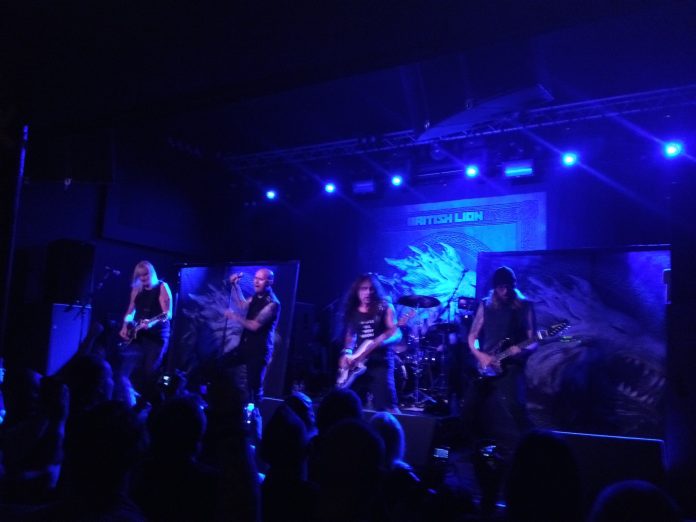 
Just in case the lavish backdrop with their name 10 feet high on wasn’t a clue, the support band tonight is The Raven Age. The Essex mob only have an EP out right now but very obviously have ambitions way beyond that. They have a massive, lush sound that is more modern than you might initially expect. On work like “Eye Among The Blind” it manifests itself in a kind of melodic Funeral For A Friend type way, while “The Death March” is more of a heads down cruncher. All, though have huge hooks and a bigger chorus. And let’s be blunt, having the surname Harris and a dad who is in tonight’s headliners as well as the greatest band in the world, as guitarist George does isn’t a hinderance. That said, the band are going places and are more than deserving of this – or any other – shot they get. At their best when they cut loose and go for it as on “Salem’s Fate” which combines fists in the air with a soaring quality. Even with a stand in guitarist here, The Raven Age are going to one to watch fly. If – and it’s a big if – there were any remaining doubts then the stomping closer of “Angel In Disgrace” removes them neatly.

As the founder and visionary of Iron Maiden since the 1970’s, Steve Harris has more than achieved his dreams, so if he fancies touring with British Lion again he can do just that.

When the band were first announced a couple of years ago it came as something of a shock. No one knew he had another band. Christ, he is consumed by Maiden. But this was a collection of songs he wrote a few years back with his mates. And, dammit, he was gonna play them.

The album was good. The gigs were better. And now he – and they – are back again. As they start with the classic rock infused “This Is My God” and ‘Arry runs at the front row with that West Ham bass the thought is in the air: he loves this. He loves playing the clubs that his day job just can’t do.

British Lion are clearly here to stay too. Tonight’s setlist takes in plenty from the debut record of course, but also stops off for a decent smattering from a new record. Of these, “Father Lucifer” with its fine guitar work and “Spitfire” with its – whisper it – galloping qualities particularly impress.

This pack of Lions are very much a band too. Singer Richard Taylor is an energetic frontman in the time-honoured mould and the five feed off each other well throughout, with guitarist David Hawkins particularly impressive. The fact they are more road-worn and crucially road-tested these days has elevated tracks like the jaunty “The Chosen Ones” beyond the level they were before, while the downright groovy “Guineas And Crowns” is a real highlight.

Although these songs are right from the playbook of the history of hard rock, they are imbued with a darkness. Tracks like “A World Without Heaven” and “These Are The Hands” have a real bleak, almost nihilistic heart.

What is great about British Lion, though is rather shown by the lack of encore. Quite simply, there is no ego here. This is just a bunch of blokes playing songs because they can and they want to. Listen to and watch them playing UFO’s “Let It Roll” with massive grins on their faces and you get right to the nub of the matter.

They end tonight with “Eyes Of The Young,” which is a real Springsteen-ish affair, and the feeling abounds that this has just been great fun. A chance for both audience and band to connect with some fine hard rock songs. And that, you’d guess, was entirely the point.