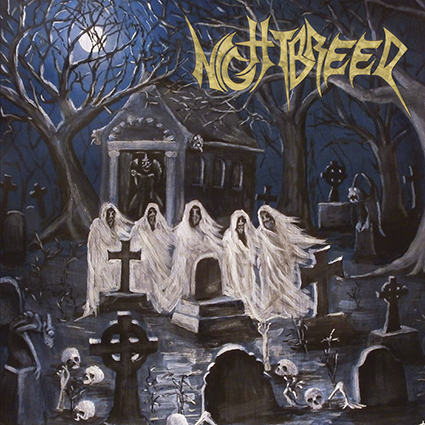 Greek thrashers unleash first song off debut. And its a cracker
Greek Thrash Metal band NIGHTBREED have produced an Official Video for the track ‘Taste Of Blood’ taken from their self titled debut full length album.
The video directed and edited by Panagiotis Misdeal at Clepsydra Studio (www.clepsydrastudio.gr) is a superb song.
NIGHTBREED’s debut album, released in March of 2015 on the German Metal Music label WITCHES BREW, offers up 38 minutes of pure, fast, aggressive Thrash like in the days of old! Production on the album took place at a number of locations in 2014, Drums were recorded at Soundflakes Recording Studios by John Mcris, Bass at Lamia City, engineering by Dimitris Harisis and Guitars/Vocals were engineered & recorded at Clepsydra Recordings by Panagiotis Misdeal. Cover art (Trifonas Stathopoulos)
Tracklisting
1. Satanized
2. Pandemic
3. Epilepsy
4. Public Execution
5. Holocaust
6. In The Mouth Of Madness
7. Taste Of Blood
8. Horde Of The Undead
9. Nightbreed
NIGHTBREED’s debut self titled album, as well as their 2012 demo “From Yuggoth”, can be purchased now on the WITCHES BREW Webshop.
To keep up to date with NIGHTBREED make sure to “like” their facebook page: www.facebook.com/NightbreedOfficial