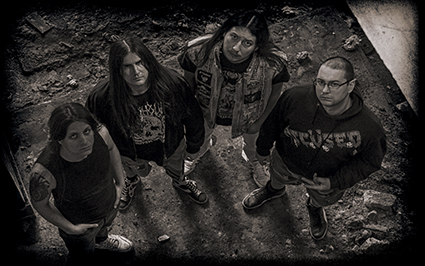 This working class death/punk crossover from Serbia has just released its new album
Nadimac was formed in 2003 in the working class districts of Belgrade, Serbia.
They combine a very fast and aggressive approach to music with honest street and every day life experiences, with the intention to move society and every individual to react and start making changes for the better. Nadimac plays an extreme version of ultrafast crossover thrash, with a lot of hard core punk, power-violence, death metal, grind, speed metal and of course thrash metal influences.
Although the band plays since the beginning of the 2000s there wasn’t ever intention to be part of the new wave of thrash metal trend, but to popularize real, devoted and honest underground and DIY attitude to fast music. Nadimac has 4 official albums, and about 25 DVD, Ep, single, and split releases all over the world.
The band has toured all over the ex-Yugoslavia territories and also in region of south/west and central Europe. Nadimac had the honour to support bands such as DRI, Sodom, Accused, Napalm death, Onslaught, Municipal Waste, Warbringer, Tankard, Hatebreed, etc in Serbia, and other countries.
Danilo Trbojevic (Screams)
Stefan Corovic (Strings)
Marko Pavlovic (Bass)
Dragan Ristic (Batterys)
www.facebook.com/pages/NadimaC-Official-band-page-Thrashcrossover-Serbia/194589403893872