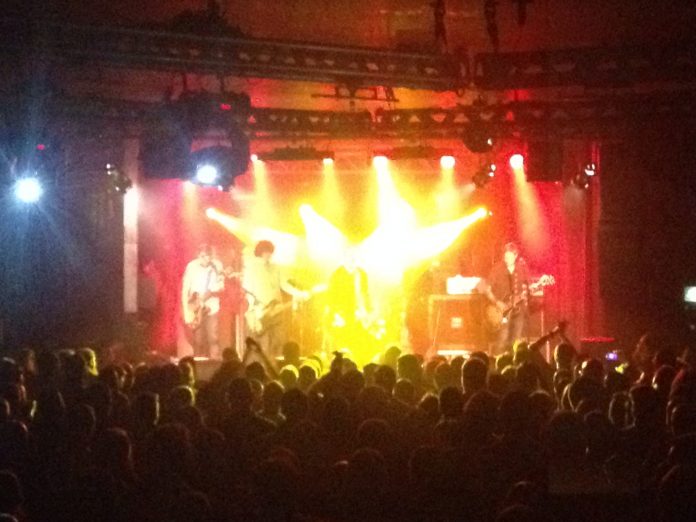 Brooklyn’s So So Glo’s are concerned about our toilet habits.

“Why’s no one standing in that part of the room”, says singer Alex Levine. “Did someone go to the bathroom over there or something?” Even if one of the assembled throng had, as one might put it, done their business over the floor it does seem unlikely to put a dent in his day. SSG’s world, you see, is a jaunty one. Punk wise they take their cue from the Ramones, so opener “Son Of An American” races along, “Wrecking Ball” outdoes it for cheeriness, while “Broken Mirror Baby” is bouncier than a Kangaroo on a trampoline. It’s very much a case of “hey-ho-let’s-go” as even a song “about the apocalypse” features some gorgeous harmony vocals. Alex and his brother Ryan Levine feed off each other superbly and fans of must missed Next-Big-Things Honeycrack might be wise to investigate the So So Go’s deliciously hyper sound.

Years of following The Hold Steady has taught MVM to expect the unexpected. But even now they still have the capacity to surprise.

Case in point, no one thought they were going to march on, singer Craig waving and dancing like some demented long-forgotten chat show host, and no one thought they’d start with “Ask Her For Adderall” and yet both these things happen.

What happens next is essentially a 90 minute journey which explains how a band with it’s roots in the punk scene of the late 1990s in small town Minneapolis, grew to become just about the best bar room band on the planet. “I Hope This Whole Thing Didn’t Frighten You,” lead track on the new “Teeth Dreams” record soon gives way to an almost metal version of “The Swish” from their phenomenal debut album. These songs have a real – and rare – every man quality, they are big rock n roll, but never bloated, while lyrically, both in content and delivery, no one does it quite like THS. It is a rare band indeed that sounds both classic and original.

“Sequestered In Memphis” is ebullience and catchiness personified, cramming as much melody into three minutes as some bands manage in a career, but with this five piece you need to scratch the surface: “In bar light she looked alright,” muses Finn, “In daylight she was desperate.” There is a dark heart to these tracks.

And yet, the Hold Steady have always had a message of positivity and unification, speaking of the need for us to get together and listen to rock n roll. The band have never lost that love of the music, “Constructive Summer” crackles with excitement, where in other hands it would be just another tale of small town frustration, and when we raise our “toast to St Joe Strummer” it’s one of the most heartfelt moments of the year. That this song immediately segues in “Hot Soft Light” shows just why this band are so special. The guitar work here from Tad Kubler is exceptional.

And they are in no way finished. “Stuck Between Stations” is the best E Street Band that Springsteen didn’t write, “Your Little Hoodrat Friend” speaks for kids in small towns everywhere, “Southtown Girls” finds time for a guitar duel between Kubler and Steve Selvidge and the encore of “Stay Positive” is just what it was six years ago: a veritable anthem.

Being resolutely uncool might be the new cool, and certainly Finn in particular as he almost literally skips for joy at times, is about least rock star looking rock star in rock today, perhaps this is why he still seems a little uncertain: “I hope we are….I think we are….a pretty good bar band,” he hesitates at one point, as if seeking approval. It’s the understatement of 2014.