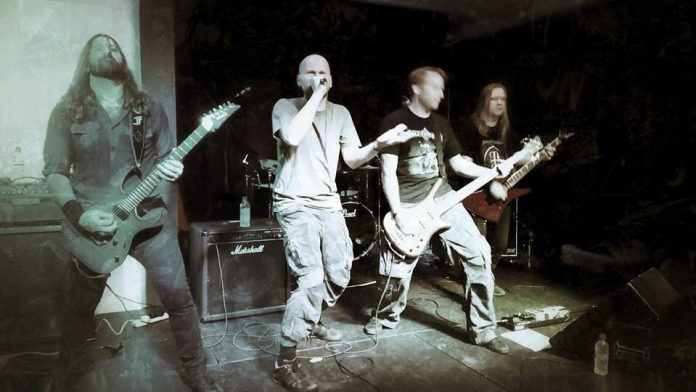 Now this has the potential to be odd.

A superb new venue, complete with leather chairs to watch the gig from isn’t what you expect from a heavy metal show.

However, in amongst the surroundings – essentially a very nicely converted warehouse at the back of a department store (and by the way the sound is spectacular) comes a load of hairy arsed rockers, of which local boys Cause To Effect are the first. They bring a rather pleasing brand of hard rock, with last track “Headlines” perhaps showing them at their best. Slowly building into a crunching piece of alternative yet melodic rock, there is much here to make them worth checking out.

Bradford’s Gods Of Hellfire haven’t come all this way for melody and are an appreciable few notches up in heaviness. There is a real Orange Goblin type rumble to their opener, while singer Alec Calderbank appears ready to attack at a moments notice. There is usually something dark and uncompromising when metal comes out of the North – the glory days of the Peaceville label produced so much great stuff in late 1980s and early 1990s – and you can add GOH to that bracket without them being out of place for a second. “Burning Asylum” is probably the pick of this dirty, grimy mix, with it’s added groove laden ending, but “The Punisher” runs it close. Gods of Hellfire have come from the depths to deliver something that is heavy, pummeling, bludgeoning, a touch unhinged and absolutely superb.

Black Hounds showed a couple of months ago that they had plenty of talent, and they set about cementing that here. The experienced local lads have a similar feel to mid-period Almighty, with plenty of crunch to their sound. “Love And Death” from their forthcoming EP, adds some frantic drumming from Joe, and the breakdown in the middle is made for headbanging, while Ant on vocals and guitar makes for an engaging presence. Their choice of cover gets bonus points for originality as Joe Bonanassa’s “Ballad Of John Henry” gets the full metal treatment. Elsewhere “Hit And Run” is as fast and turbo charged as you want it to be and there is a real suspicion that the Black Hounds could be the dogs to have their day.

If ticket sales were given for being decent guys, then this gig would be at the Wolves Football Stadium just over the road. As it is Eternal Fear are spending a more intimate Sunday than they might have hoped. The band themselves don’t appear overly perturbed. As they launch into “Eternal Damnation” by way of a good evening, the die is rather cast. This is raw heavy metal writ large and in it’s purest form. Great, huge slabs of Maiden, Priest and Dio are all over these songs.

As with the very best metal there are plenty of subtleties in the sound. “Embracing Darkness” gallops along in confident fashion, while “Killing Time” possesses perhaps a little more of a slam and “World Comes Down” comes with a splash of melody.

These shows are in support of the band’s new record “Live In London” which showcases their set from last year. The 2014 trek adds a new track, “The Shadow” which gives notice that the record they are due to record later this year might be a good one.

Ove “Evil” Johnnson (we assume the nickname is ironic given that he never stops smiling) drapes himself in an Eternal Fear flag for a brilliant “Army From Hell,” while “Piece Of Me” is a real fists-in-the-air statement of defiance and “Hate” is the closest Eternal Fear get to a snarling beast.

Four shows in four days from a band that is clearly enjoying themselves. Anyone looking for anything that is ironically “cool” can go look somewhere else. Eternal Fear are not hipsters, they are evidently fans as well as being gifted musicians and no one here is complaining that the music doesn’t break new and unnecessary ground. And despite the suggestion in the band name, nobody will ever be remotely frightened to enjoy it.