An eight-track split from the two ends of the Self Destructo spectrum come together to create chaos. 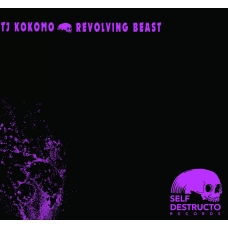 North Carolina has a proud heritage of producing “old-time” music such as Jazz and Bluegrass over the past 70 years or more.  It’s also no stranger to the down and  dirty world of metal and punk.  Somewhere in between metal and punk lies Revolving Beast.  However the beast is not for sleeping.  It’s wide awake and ready to attack.

Occasionally the tracks on offer shows the links between guitarist Edian Thorr’s main concern, the awesome Valient Thorr, but then at other times it couldn’t be more different.  Not an unusual for someone’s side project perhaps.

Drummer Storm Castañeda, and bassist Kenneth Ells complete the line-up and it’s a powerhouse trio that soak up the sounds of Mondo Generator in spirit and attitude.

Kicking off with “Four Banger” which is about as self descriptive as a song can get.  There are many twists and turns to be had though throughout their four tracks with “Hounds” a jarring adrenalin-fueled four minutes that is the best track on the whole thing.

Likewise “Hogs” is a constantly shifting epic that more than displays the individual and collective talents on offer.

As far as a four track introduction to a band goes it’s pretty damn fine.

Norway is not a country reknowned for it’s Beach music.  It’s difficult to really think of a Norwegian summertime band.  That said you could assume that 1980’s pop tartlets A-Ha must have had a summer hit or two in their time.

TJ Kokomo seem to be on a mission to bring the world their unique brand of Scandinavian “sun & sand” mayhem.  Here they go for four cover versions starting an acoustic rendition of their favourite band and chief  inspiration Turbonegro’s  “All of my Friends are Dead”.

A truly joyless cover of The Beach Boys classic “Sloop John B”, which is immediately not exactly one of their cheerier moments, is a odd choice.  Sounding  like the band  were forced at gunpoint to think up a random song to play and then playing it as if their lives did not depend on it.  It’s entertainingly pointless.  If you have ever heard Johnny Depp’s short-lived band P, featuring Gibby Haynes of the Butthole Surfers, do a cover of “Dancing Queen” by Abba you might get a similar feeling.

Their gang-vocal version of “Whiskey In The Jar” ramps up the excitement to a half-smile.  A few lyrical amendments here and there give it a much looser feel.

The point is they are not here to be taken seriously and neither are the cover versions on offer.  They have been set up as a bit of a laugh through a haze of broken beer bottles and half-eaten pizzas.  Sometimes in life being serious just doesn’t cut it.  When you feel that way inclined it might be worth giving TJ Kokomo a call.

The split will be released on a limited split 12” LP out in early November 2014 via Self Destructo Records.