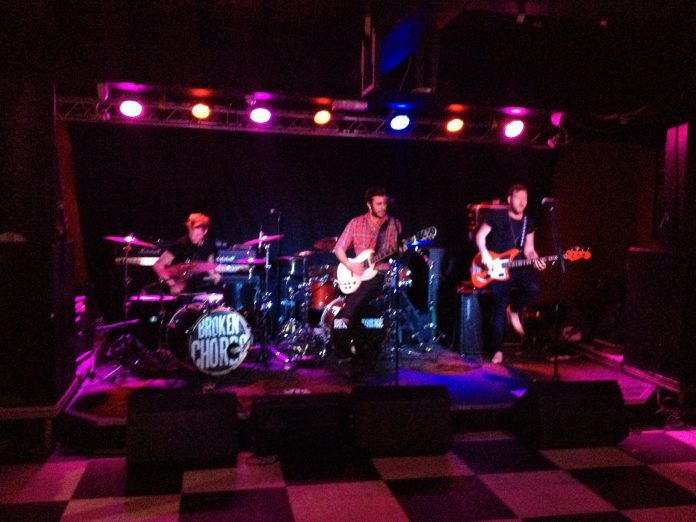 Appropriately for the area that invented the genre, Midlanders Redline have a real classic metal feel. Their opening track immediately brings to mind bands like Dio, second number “Battle Cry” does nothing to shake that thought. Elsewhere “Edge Of Falling,” has a kind of early Van Halen feel about it and there is absolutely nothing to dislike here. Best of all, perhaps, is “Some Kind Of Pain” which gallops along like prime Deep Purple. “We want to keep the patter to a minimum to play more music,” explains singer Kez Taylor and they do just that. No frills heavy rock delivered with the absolute bare minimum of fuss is sometimes all you need and that’s exactly what Redline deliver.

Cocksure, young and talented, it’s small wonder that The Broken Chords current single is called “Get Some,” the song has the kind of swagger that only certain bands possess. The band have enough confidence to chuck it in early the set.

TBC bring bucketloads of energy to their rock, but they also bring a huge sound. “Rock And Stone” not only has massive intent but carries it’s ambition off into the far distance. Singer and Guitarist Joe preens his way through the half an hour, while Aid on bass keeps things together and drummer Jamie fair old beats the crap out of his kit.

When they sing the song “The Real Deal” it almost feels like a statement, The Broken Chords absolutely mean every word. Noticeably less bluesy – “Lucky Seven” aside – and distinctly heavier than on the recorded output so far, the trio bristle with the air of a band who know their time is now. The last song they play is “Pyro.” Apt as The Broken Chords are on fire.

Of all the reasons for gigs being held up, Jasper Carrott telling a band when they can and can’t go on stage must be a first. The former funnyman is playing a gig upstairs and he’s apparently decreed that what happens down here doesn’t happen until he says so.

Trouble is, even when Mr. Carrott does allow action, Bernie Torme’s vocals are initially too low down in the mix, but this is the least of his worries. Sound sorted, word comes from (literally) upstairs that it’s too loud, meaning that a clearly agitated Torme has to play some filler: “this is a rock club, we were booked to play a rock club….” He sneers.

All of which means that it takes about 15 minutes and three attempts at starting before this starts to feel like a show, a blusey “Blood Run Cold” from his just released – and brilliant – “Flowers And Dirt” record kicks us off in earnest, as Torme takes his anger out the only way a guitarist should – by playing an incendiary show.

It’s easy to see why he’s pissed off. Gillian, Ozzy and Atomic Rooster are just three of the legends that have used his services and Torme very obviously remains a brilliant guitar player, frequently the solo’s verge on jaw-dropping, and the riff on “Party Town” has so much crunch that even Jasper might have been impressed, he would have heard it….

This is blues rock in the raw, warts and all, and the almost accusatory tone of “Star,” written over 30 years ago but as prescient today as then, almost dares anyone who does to have talent first. Talent like Torme’s would be a start, is the inference and when and his band lock into a groove there is something pretty special going on here.

His recent output, like “….Dirt” album showed how vital Torme remains, and his band back him superbly throughout. And the cover of “Trouble,” with it’s key line “don’t you mess around with me” might have had a touch more resonance than normal. Before he finishes by paying homage to Rory Gallagher (“one of my heroes”) with Taste’s “Same Old Story.”

On occasion, the guitar playing here rattled the walls, whether Torme always plays this loud or he reserves this type of turned-up-to-eleven showing for, let’s call them “special occasions” only he knows. The one thing that MV is damn sure of, however, is this: what happened down here was a damn sight more fun than watching a faded comedian upstairs. Like the song Torme played earlier said: you can’t beat rock n roll. And you can tell Jasper we said that.