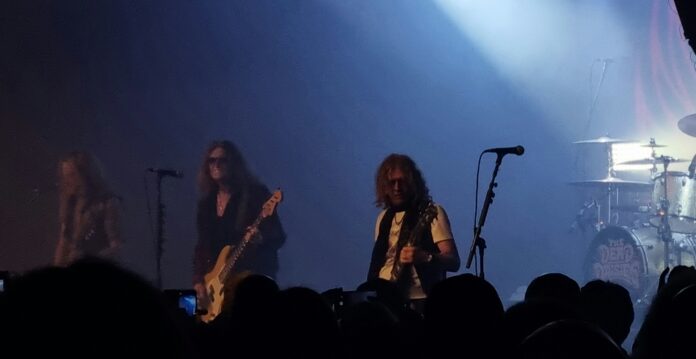 I am firmly convinced there is a parallel universe, one where FM are the arena, mainstream stars they should be. Until we gain access to that other world, however, we are left with the sight of Steve Overland and his merry men playing in front of some other bands gear. This latest support slot has rotated, but it’s FM that are on first tonight, giving it their all for 30 minutes and along the way playing some of the finest UK AOR there has ever been. Songs like “Bad Luck” have been around like old friends for 30 years, ready to pick up where you left off as if you’ve never been apart. This is a show sprinkled with newer stuff, though as if to emphasise just how much they still have to offer. “Killed By Love” from 2018, stands up with anything they’ve done too, but there’s no way to deny that “I Belong To The Night” and “Tough It Out” are superb songs, however many times you’ve heard them. Overland, still right up there with the best voices in rock, Jim Kirkpatrick, one of the most versatile guitarists, are a formidable pair, and their gift for writing catchy songs is rather underlined by “Turn This Car Around”, the only one from this years “Thirteen” album, but which acts as set closer already. FM might only be with us for a short time, but their appearance on any bill is always one to cherish.

Back in July, The Graham Bonnet Band had played this venue in the smaller room. MV had been there, and everything we’d said in the review that night still applies. The “band” part of the Graham Bonnet band is ever more important, that’s for sure. Suffering with a cold, he’d had to cut his show short in London the night before, and he disappears for an extended period here, with the band filling the gap with a wonderful jam. “Here’s one from my past” he’d said before “Eyes Of The World” and of course it helps when you can call upon a couple of the finest classic rock tunes ever. He plays them both and “All Night Long” plus “Since You’ve Been Gone” are fun. Bonnet has always surrounded himself with magnificent musicians, and proves that with “Assault Attack” from the Michael Schenker Band and the closing “Lost In Hollywood”. He’ll have better nights, but the quality of the songs and the playing shined through here.

The Dead Daisies show seems to have a distinct arc. Brian Tichy announcing his return to the band with an incendiary drum solo seems to usher in part two if you will. As it does founder member of the group, David Lowy says his piece. Thanking the crowd for “coming on a rock n roll journey with us” he then adds: “and how good is it to have the voice of rock in the band?”

So lets get to the elephant in the room. Glenn Hughes joined TDD in 2019 and has put his stamp over their two albums and constant touring like no one else would have. And let’s be honest,  in the process, he’s elevated what was a very, very good rock band into a sensational one.

If there was any remaining doubt, then this 100 minutes or so surely washes that away? Beginning with “Long Way To Go” (a track from what now seems the dim and distant past such is the pace this band works at, but is only from 2016) most of the rest of it is culled from the two Hughes albums.

And they contain some wonderful moments. Heavier, groovier and somehow more mystical than before, “Unspoken” is a good example of that, and even the way Hughes sings work he wasn’t on, such as “Rise Up” turns it into something different.

The recently released “Radiance” record is one of the albums of the year, and its title track and a mighty “Face Your Fear”, are evidence of that.

The first “Hughes” album “Holy Ground” has it’s stand out “Bustle And Flow” moment and the king of LA cool, Doug Aldrich, the guitar gunslinger to Hughes’ frontman, as in the classic mould, rips the leads seemingly out of nowhere.

Highlights are many, but “Hypnotize Yourself” is right up there. “Music is the only healer” Hughes had said at its end, and the fact this band are just fans of the music is shown by the well picked out covers. “Mistreated” from Hughes’ Deep Purple days is almost the centrepiece, “Fortunate Son” is quite simply one of the finest tracks ever made, although given a hard rock sheen here.

Indeed, after “Shine On” had ended the set, there’s a couple of covers in the encore. “Midnight Moses” is turned into a singalong and the rendition of “Burn” proves that no one can sing it like Glenn Hughes.  A local gig for him (he hails from nearby Cannock) there’s no doubt that it was a special one for the singer. Emotion gets the better of him a few times, but it always seems genuine.

The fact is that very few bands have packed as much into a decade as The Dead Daisies. Their story is incredible, but having seen them many, many times since they first came over opening for Black Star Riders, I’ll say this with huge confidence: this is not only the best they’ve ever been, but they might be the best hard rock band around right now. Ever likely David Lowy is smiling – his wildest dreams are coming true.