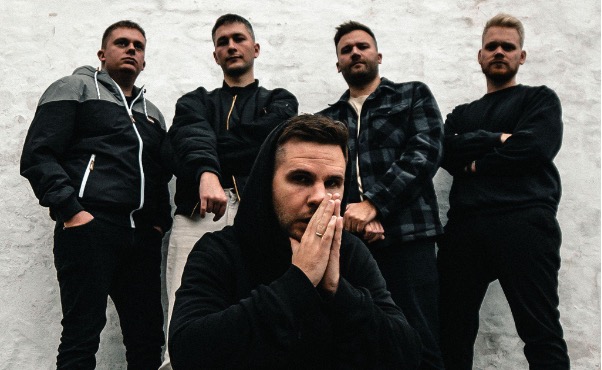 Danish Metalcore outfit APHYXION, recently announced the release of their new album ‘Ad Astra’ out 10th February via Circular Wave and have today released another taste of what is to come in the form of new single ‘Heavy Shadows’, with rising UK band IMMERSE featuring on the track.

On previous singles we have seen the band pick up great support including editorial playlisting from Spotify, YouTube Music and Amazon plus media champions such as Distorted Sound, Kerrang! Chart and Kerrang! Radio’s Alex Baker’s Fresh Blood.

“The entire song felt right and said all the things we were aiming for, but it was as though it could be lifted up even higher, if we could add more progression in the energy. We wanted something more screamy and aggressive, so when the talk about getting a feature from Immerse came about, it was a no-brainer. Archie absolutely killed it, so we are stoked that we got him on the track.”
Jonas Haagensen – Guitarist/Producer

Even though the lyrical theme of ‘Heavy Shadows’ steers clear of the topic, the song sonically depicts how it feels to have anxiety lurking around every corner of your mind. The low and dissonant intro riff charges the track with tension and thus sets the stage for one hell of a relief, as the song evolves and the chorus eventually hits. The growls are accompanied by cleans and the grand instrumentals change the energy, providing hope and solace.

“Flooding yourself with irrational thoughts, gasping frantically for air and feeling your chest get tighter and tighter. It’s hard to convey to someone how an anxiety attack really feels, but the stress and hypervigilance that comes with it is immense and very real” HEAVY SHADOWS is a song inspired by vocalist Michael Vahls own experiences with the raw emotions that consume you, when and just before an attack happens.