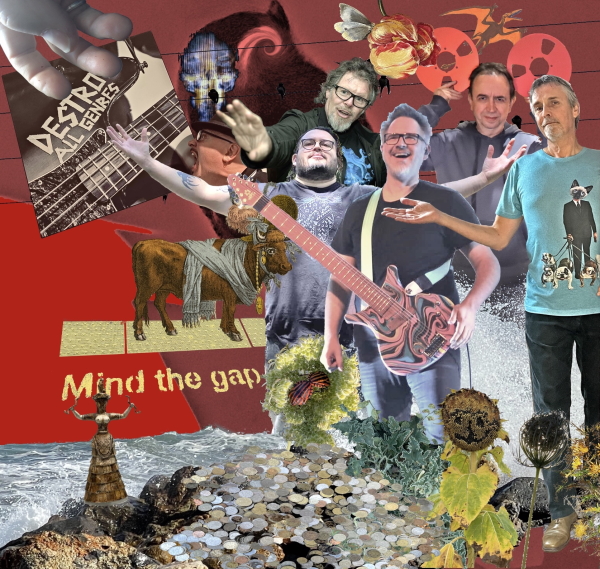 On December 2, 2022 Unquiet Music Ltd. release their new single, “I Succumb” – the first taste of their second album ‘Meme/Music’.

With instrumental contributions from Pat Mastelotto (King Crimson, Stick Men), Jon Poole (Cardiacs, Lifesigns, Dowling Poole) Markus Reuter (Stick Men) and Adrian Benavidès (Earthdiver), “I Succumb” is a song of despair to the life of the average Westerner. Enslaved by normality; condemned to capitulate to the injunction of love. Mind and body torn between the desires of individuality and undifferentiation.

The single announces Unquiet Music Ltd second official album “Meme/Music” on CD and download (via Bandcamp). The album is composed by JP Rossi, and produced by Markus Reuter (Stick Men, Reuter/Motzer/Grohowski, Anchor & Burden), crossing multiple boundaries between the electronic and the acoustic, between complexity and simplicity, between deep contemporary classical structures and textures and punchy art rock drive.

“A song of despair to the westerner’s life enslaved by normality and condemned to succumb to the injunction of love. A mind and body torn between the desires of individuality and indifferentiation”

“Bass beats and electronic noises of the multigrid dimensions of the city and the network clashing in a routine of pressure. Hammering guitars and gut-wrenching solos surround a couple of heartbreaking melodic choruses.”

Unquiet Music Ltd’s 2020 debut album, “In the Name of.. (A Prayer for our Times)”, was an arresting and hypnotic mix of contemporary classical structures, urgent solo and choral voices, and electric art-rock sonority. An abstracted electronic Mass, it merged Messaien-ic detail and depth with needle-like mechanistic precision and a hallucinatory atmosphere. Two years on, “I Succumb” illustrates the next step for Unquiet Music: avant-garde pop reflections on human connection and communication, more song-based and lyrical.

The single builds on classic yet still fresh starting points (the eerie human-vs-technology accents of Berlin-era David Bowie; the twitchy psychology of Ray Davies; the flaring relentlessness of King Crimson and the industrial chants of Laibach) while retaining the teeming post-classical sophistication of previous Unquiet Music Ltd work. Packed with contemporary neuroses and dread, it sits in an uneasy bed of bass beats and electronic noises (representing the multi-levelled grid-and-network dimensions of urban living, clashing in an inhuman routine of pressure) while hammering guitars and gut-wrenching solos surround heartbreaking melodic choruses.

In complete contrast, companion track “Love Of A Dog” is a different kind of vulnerable. Absolutely exposed, unafraid of sentiment, and peculiar (in a good way), it’s a childlike tribute to animal friendship webbed up in organ, unexpected choir and Jon Poole’s tender fretless bass. Another reflection on connection, another example of the shifting Unquiet Music perspective.

What people are saying about Unquiet Music Ltd’s new album:

“A pretty ‘out there’ album… Jean-Philippe Rossi writes and constructs the stuff in a very unique and unorthodox manner. It was a fun project to contribute to in that it was so different to anything else I’ve ever worked on.” – Jon Poole (no stranger to “out there” albums) on contributing to “Meme/Music”

“One of the most extravagant and unusual albums I’ve mixed this year! I love this great album!” – Stefano Castagna / Ritmo&Blu studios