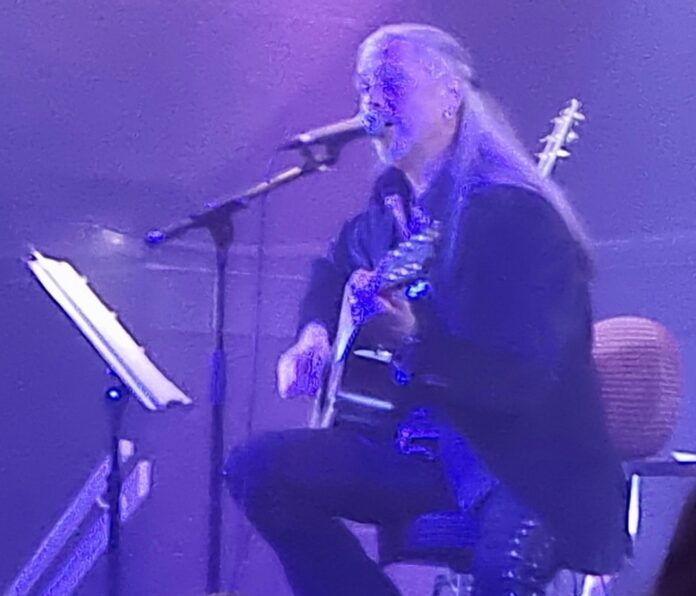 The Oxford English Dictionary, defines the word “Troubadour” thus: a poet who writes verse to music.

Danny Vaughn has just played “Seven Bells” towards the end of his near two-hour set here and says to the assembled throng: “thank you for giving an old troubadour work……”

He’s got a point. Vaughn is, he tells us, 61 years old, and he has been making music that people love for over 40 of those. And when you put him in front of his diehard fans armed with just his guitar, like he is here, he’s unstoppable.

It’s freezing outside (and frankly its not a lot warmer in the venue) but there’s such a lovely warmth in the room. Before he came over for these shows, he asked fans if there was anything they wanted to hear. At some of the gigs, there’d been a couple of suggestions, but not here. Bilston has basically picked the setlist and, in a lovely touch, Vaughn namechecks the audience members who’s choices he plays.

Of course, with all he’s done in his career there is a proper back catalogue to choose from, ranging from Tyketto’s “Is That All There Is?” and “Nothing But Love”, to just about everything else too.

Originally – and this gig had been postponed twice – Vaughn should have been here with Dan Reed, reprising their “Snake Oil And Harmony” album, but with Reed indisposed, he plays “Last Man Standing” from their canon.

Clearly, fans have many favourites amongst Danny’s career. Flesh And Blood sees “Jenny Doesn’t Live Here Anymore” unearthed, From The Inside is mined for a few, but Vaughn himself reckons “Beautiful Goodbye” is “sensational”.

A few times, Vaughn explains the story to the tunes. Occasionally, they are funny, like the one before “Why Do You Cry” which involves a bloke cleaning his gun on the bonnet of his car, and sometimes they are thought-provoking, as on “Lifted”, where he lays bare his struggles with depression.

Of course, he can only do this because he’s – literally and metaphorically – amongst friends here. Some that have followed him since the Waysted years, no doubt and he takes us back to those days for a brilliant “Heaven Tonight” (and stories about derelict farmhouses in Pwllheli and run in’s with Quo in Glasgow).

His solo material is not overlooked, either. “Soldiers And Sailors And Riverside” is superb, “Seven Bells”, a wonderful tune about the sea and inspired by Liverpool, and “a good old Irish fight song” “In The Shadow Of King John” is meant to finish the show, but he hasn’t done Tyketto’s big hit “Forever Young”, so he sorts that and there’s a real singalong.

This was not your normal gig. It feels more like someone performing for their friends or family for fun. Vaughn reckons of this tour “they are not formal”, but they are deadly serious when it comes to the music, which seems to be a reflection of the man himself.

Watching him play though, for the people who have supported for so long, is special. Danny Vaughn, the man with one of the best voices in rock, has put his poetry to music. That’s what troubadour’s do. And he’s one of the finest there is.