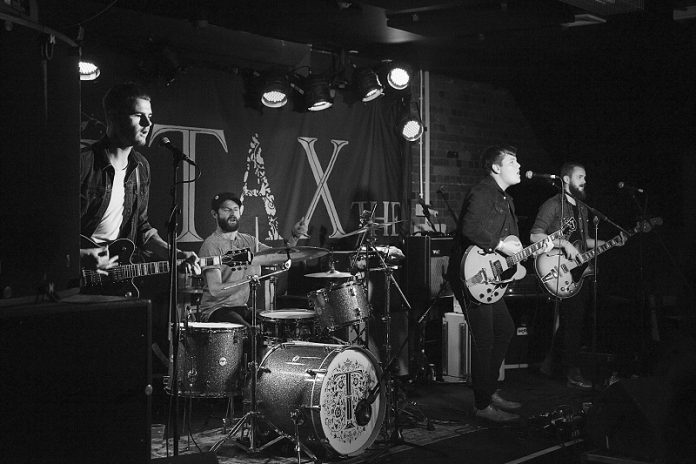 Local boys The Crimson Star are no strangers to this stage. Indeed MV last saw them on it just a few months ago. Then their recent “Driven” EP was brand new, and the interim has seen them road test songs like the aggressive “Holy War” and the more hook infused “Mexicana” and there’s every sign that this is a band getting better and better. As if to prove that “Vanity Mirror” is a mighty fine effort, most probably to be the centrepiece of the next record, you’d guess. One of the best bands in the area is well set for a step up and add yet more fuel to MV’s theory that bad three piece bands don’t exist.

Broken Witt Rebels, by contrast are enjoying their first ever show in Wolverhampton. Odd really as they are from just down the road in Birmingham. For Luke Davis, the impressively hirsute bass player, this is a good thing. “We’ve been away a lot, and it’s great to hear some proper accents”, he smiles. He smiles a lot – blimey they all smile a lot – you would too if you’d got the hype and the press these guys had. First the UK now the world seems to be the general consensus, it’s easy to see why too. The “Georgia Pine” EP is choc full of arena filling sized hooks like those on “Getaway Man” and the passion with which singer Danny Core in particular delivers “Low” and the slow, deliberate and bluesy title track seems to indicate that they will give everything they have to get to the top. Like the first band BWR have taken advantage of a fertile period to air some new stuff, with the slinky “Turn Me On” perhaps the pick. Older material like “Howlin'” shows they’ve been writing this kind of stuff for a while, and the audience reaction to the closing “Guns” and “Shake Me Down” rather point out that they’ll be around for years.

Even Tax The Heat have history with the Slade Rooms. “Three years ago,” offers singer Alex Veale, “we were here with The Union, just excited to be on our first tour. Now we are headlining…..” He trails off, as if he can’t believe it, but then they too have stuck out new material this year and constant touring has seen their profile rise.

In contrast to the other bands, TTH managed a full-length and “Fed To The Lions” is a mighty fine record. As you’d expect most of the set is from it and it crackles with life. “Stood On The Platform To Leave” is transformed from album track to show opener with ease, and “Learn To Drown” screeches into view as if it’s got business to attend to at a million miles an hour. The ones you’d except to be superb, like “Animals”, “Caroline” and “Devil’s Daughter” are just that, and when they take a trip back to that first EP its for a funky, soulful “Summer Girls”.

“Some Sympathy” puts them squarely in singalong territory, as their ambitions clearly switch from being the support to the bonafide main act, so much so that they afford themselves an encore after “Highway Home” which includes “Brand New Cadillac” by the Clash, and if the suspicion has long been that there is more to Tax The Heat than simple hard rock then things like that are why there is clearly more to come.

All three bands here have ambitions to move on. There’s a couple who look destined for very big things indeed.